On this day, back in the 2011, Partizan have claimed their fifth regional league in a row, after beating Union Olimpija in the Final of the Final Four Tournament in Stožice Arena, Ljubljana. 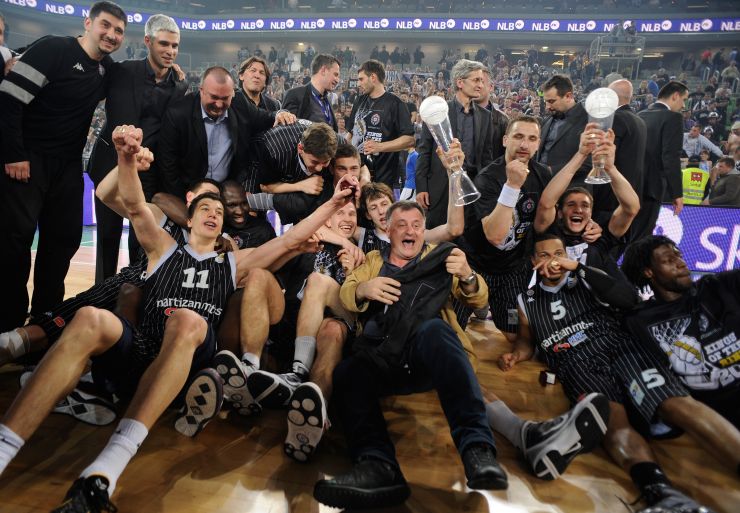 Partizan dynasty have claimed their fifth and last consecutive regional league trophy in the five season long streak in the 2011 at the Final Four tournament in Ljubljana, completing the longest championship winning streak by any club so far in the regional competition.

The 2010/11 season was the first one for them to do it without head coach Duško Vujošević, as he left the club and handed the helm to his former assistant coach Vladimir Jovanović. With players Curtis Jerrels, Dušan Kecman, Vladimir Lučić, Dragan Milosavljević, Bogdan Bogdanović, Raško Katić, Nathan Jawai, Nemanja Bešović, Petar Božić, James Gist and Jan Vesely under his command, Jovanović did a great job in the Regular Season, as they finished it on the first place, having won 18 out of 26 games played.

Final Four tournament of the regional competition followed in newly opened Stožice Arena in Ljubljana, as the two Slovenian teams occupied second and third place in the standings – Union Olimpija taking the second and Krka third and both of them claimed 17 wins in the Regular Season. The fourth team to qualify for the big event were Budućnost m:tel with 15 games won.

In the Semi-finals Union Olimpija have prevailed over Krka 67:57 in a domestic clash and in the other game of the night, Partizan were better than Budućnost m:tel, with the score of 62:58. On the first obstacle on the way towards the Final, Curtis Jerrels and Raško Katić scored 13 points each.

The big Final followed between the hosts Union Olimpija and Partizan in which there were no clear favourites. Some were giving bigger chances to the hosts due to the home court advantage, while the others were considering the black and white to be in the advantage thanks to their better performances all season long.

It turned out that the latter were right. Partizan went ahead by 3 points in the opening quarter and held advantage throughout the clash. After 3 quarters they were up by 7 points and even though the green and white fought back in the last quarter, they did not manage to turn the game completely upside-down. Partizan celebrated 77:74.

For the wininig side, Curtis Jerrels was once more in the limelight. He had 20 points on his record, as the game has ended, while James Gist followed with 12 points, Dušan Kecman with 11 and Nathan Jawai with 10.

This was the fifth and last consecutive ABA League trophy for Partizan, as their streak has ended a year later, when Maccabi Electra has taken the throne away from then.