On this day, last year, Crvena zvezda mts have prevailed over Budućnost VOLI in the decisive Game 5 of the ABA League Finals and won their fourth regional competition trophy. 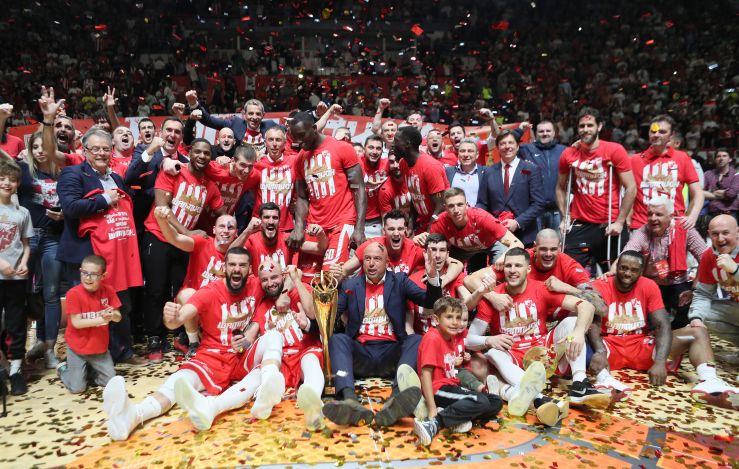 For Crvena zvezda mts fans, the memory of the last season’s Finals is for sure still alive and that’s completely natural, as the series have brought the red and white world their fourth title of the best club in the regional club competition.

They were followed by Cedevita (16 victories), Budućnost VOLI (just as many) and Partizan NIS (14).

In the Semi-finals, Crvena zvezda mts faced Partizan NIS in the eternal derby of the Belgrade city 2:1 in the series, with the scores 106:101, 70:67 and 84:63. In the decisive game, the red and white have taken advantage of the experience of Stratos Perperoglou, who scored 18 points, while Filip Čović and Ognjen Dobrić had 10 apiece. In the other Semi-final pair, Budućnost VOLI prevailed over Cedevita 2:1 in victories with the decisive win fought on the road in Zagreb.

The Finals were set and it was going to be the repetition of the ABA League Finals from the season before. Again, Crvena zvezda mts and Budućnost VOLI were about to face each other and again the Belgrade squad had the home court advantage.

However, the outcome was different this time. Crvena zvezda mts just did not let their home court advantage slip out of their hands, even though Budućnost VOLI resisted them hard.

It was all tied in the Finals with a game remaining and the teams have moved to Belgrade, where eventually Crvena zvezda mts dominated the Game 5 and got the sweet revenge for the defeat in the Finals a year before. They have celebrated 97:54 and lifted the ABA League trophy for the fourth time, but for the first time with head coach Milan Tomić at the helm, as Dejan Radonjić did it the past three times.

Billy Baron was the crucial player for Crvena zvezda mts in the Playoffs, as he led Zvezda towards the trophy with excellent performances in eight games, with an average of 13.8 points, 2.8 rebounds, 2.8 assists, 0.9 steals per game and a valuation of 14.5.