Zvezda win the thriller against Igokea

The home team had two 3-point shots in the last seconds, but they missed both of them... 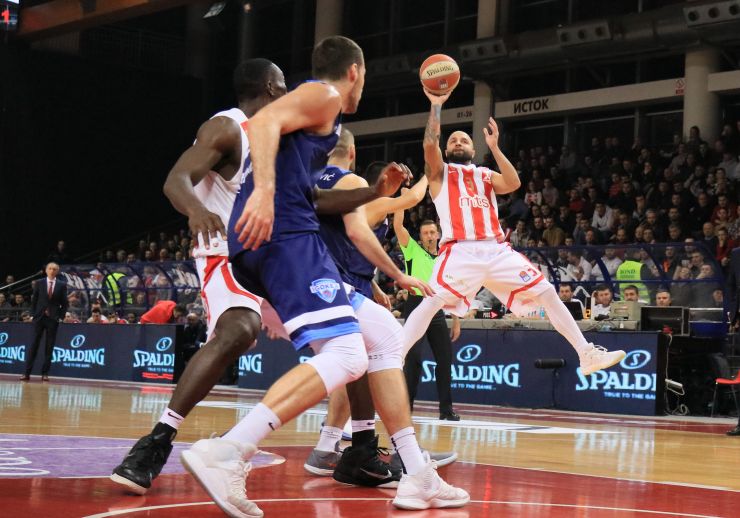 Game recap: Crvena zvezda mts have won the thrilling game against Igokea on the road and have therefore kept the perfect score in the 2018/19 ABA League regular season! Still, it must be said that this time the red & whites had a lot of luck at the end, as Igokea had two open 3-point shots to win the match in the last seconds, but the home side missed both of them.

Key moments: Everything started on 34 seconds before the end, when Crvena zvezda mts were up by 75:73. Crvena zvezda mts youngster Boriša Simanić missed the floater, while Igokea’s forward Sava Lešić somehow managed to catch the ball... But, Lešić then made a terrible mistake, as his pass was intercepted by Zvezda’s guard Aleksa Radanov who then made an easy dunk – 77:73.

On the other side of the court, Igokea’s captain Vuk Radivojević missed a 3-point shot, but the ball ended up in the hands of his teammate Marko Luković who drained the 3-pointer – 77:76. With just 15 seconds left on the game clock, Igokea’s team had to make a quick foul on Boriša Simanić, who scored both of his free throws and increased the lead of Crvena zvezda mts to 79:76. Then, Zvezda’s crew decided to make a foul on Danilo Anđušić, which turned out to be a smart decision as Anđušić made just 1 out of 2 free throws – 79:77.

Zvezda had the throw-in just under their basket, but then Ognjen Dobrić made a bad pass and Igokea regained the ball-possesion with less than 10 seconds on the game clock! Anđušić made a pass to Vuk Radivojević who was wide open behind the 3-point line… HE MISSED! Still, the ball somehow bounced back right to the hands of Danilo Anđušić who pulled up for a 3-pointer at the buzzer... HE MISSED as well, so the score remained 79:77 for Crvena zvezda mts.

Man of the match: Joe Ragland once again took the role of the team leader in the key moments. Zvezda's point guard scored 18 points, while most of them came in the 4th quarter. On top of that he also had 7 assists.