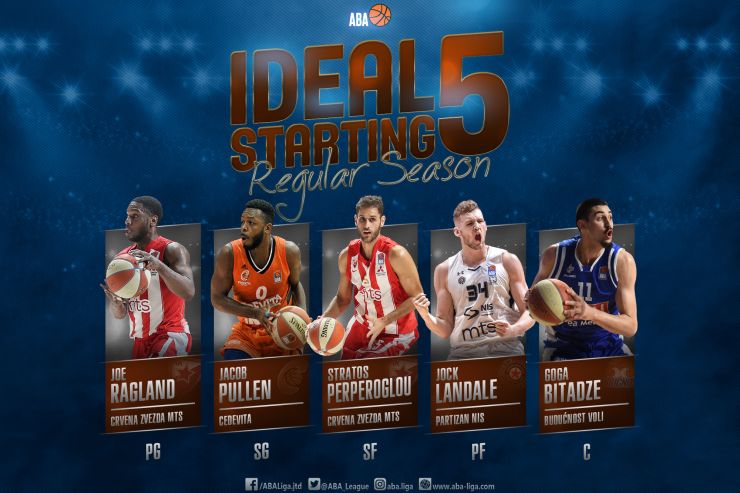 Budućnost VOLI rising star player Goga Bitadze is the player that received the highest % of combined votes of the head coaches, fans and the ABA League in the voting for the Ideal Starting Five of the 2018/19 season. He won the total of 13.2% and is followed by Jacob Pullen (12.4%), Stratos Perperoglou (9.3%), Joe Ragland (8.9%) and Jock Landale (7.8%).

Joe Ragland – Crvena zvezda mts star point guard led his team this season to the very first position in the standings at the end of the regular season, losing only one single game so far, which is quite an astonishing achievement. The American has been averaging 10.9 points, 6 assists, 2.2 rebounds, 1.1 steals and a valuation of 13.7 on the way.

Jacob Pullen – Cedevita have not started the season in the best possible fashion, but ever since they have made several changes to their roster, adding Jacob Pullen as well, things have gotten better and that’s how you can tell what kind of a difference the player has done to the team. He has been averaging 17.4 points, 2.1 assists, 1.7 rebounds and a valuation of 14.8 per game, leading his team to the second place in the regular season.

Stratos Perperoglou – The Greek international has been an integral part of the dominant Crvena zvezda mts squad, that has finished the regular season with almost a perfect record. He averaged 10.4 points, 3.3 rebounds, 2.1 assists, 1.1 steal and a valuation of 10.3.

Jock Landale – The fans certainly love Jock Landale, which was evident from the voting of fans, where he finished at the top of all of the players. He was thrilling the black and white fans with his energy and attractive plays every time he stepped on court. He finished the regular season with an average of 12.4 points, 6 rebounds, 2 assists and a valuation of 16.

Goga Bitadze – Georgian prodigy simply astonished the regional basketball public, as he was dominating the ABA League courts playing for both Mega Bemax and later Budućnost VOLI this season. With his current team, he managed to qualify for the third place in the regular season and will be demonstrating his skills again in the ABA League Playoffs for the reigning champions. This season, the player that has been previously named the MVP of October and MVP of the 21st round of the season as well as the Top Prospect of the regional competition, has been averaging 16.3 points, 6.4 rebounds, 2 blocks, 0.9 assists and a valuation of 20 per game, which is also the third highest valuation amongst all players this season in the ABA League.