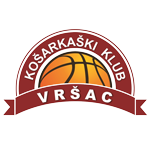 BEGINNINGS Vršac is one of the oldest basketball clubs in the region. It was founded in 1946, while the club has changed various names throughout the years, depending on which company was sponsoring the team. The most famous of them all is, of course, Hemofarm Vršac, which was the official club's name for 20 years (1992-2012). During that period, Vršac has achieved the greatest results in club's history, including winning the regional league title in the 2004/05 season.

GLORY DAYS  The most valuable trophy in Vršac cupboard is definitely the regional league title, which was won in the 2004/05 season. Back then the team was called Hemofarm, while the boys from Vršac defeated Partizan NIS in the final match by 89:76. Vršac played in one more regional league final match, back in 2007/08 season, but they got defeated by Partizan NIS in that game. Also, this team played in 5 Serbian Championship Finals, however they have never managed to win the trophy. Vršac have also played an important role in the European competitions, as they played in the FIBA Korać Cup Finals in the 2000/01 season, but they got defeated by Unicaja Malaga. Also, Vršac played 3 times in the EuroCup semi-finals and once in the FIBA EuroChallenge Cup Final.
Club Information
 KK Vršac, Vršac

Lovćen successful on the road in Vršac
On the road in Millenium Sports Hall in Vršac, Lovćen 1947 have beaten the hosts and have celebrated their tenth win of the season.
Sutjeska keep their Playoffs dream alive by beating Vršac
At home in Nikšić, Sutjeska have prevailed over Vršac and with nine triumphs on their record now, they are keeping their dream of reaching the ABA League 2 Playoffs alive.
Split victorious in Vršac
Split have achieved their seventh win of the season in the ABA League 2, as they have outplayed Vršac on the road in Millenium Sports Hall.
Major comeback and win for Zrinjski in Vršac
In the last round of the first half of the regular season, Zrinjski have made a major comeback to beat Vršac on the road in Millenium Hall.
Lovćen keep counting on Playoffs after beating Vršac
In Cetinje, Lovćen 1947 have beaten Vršac and achieved their 6th win of the ABA League season. Vršac, on the other hand, continue to struggle at the bottom of the standings.
Sixt Primorska keep perfect record by beating Vršac on the road
In the opening game of the ABA League Round 9, Sixt Primorska have celebrated a win for the 9th time in a row this season, by beating Vršac on the road. They keep perfect record after nine rounds and stay firmly placed on the top. The hosts continue the season with one win.
Borac keep their Playoffs dream alive after beating Vršac
Last season’s first placed team of the regular season Borac have beaten Vršac at home court in Čačak, scored their third win of the season and are keeping their dream of qualifying for the Playoffs alive.
Fifth win of the season for Spars
Spars have beaten Vršac at home in Grbavica Sports Hall in Sarajevo and grabbed their fifth win of the season.
Show more related news
@ABA_League
ABALiga.jtd
ABALigajtd
aba.liga
www.aba-liga.com