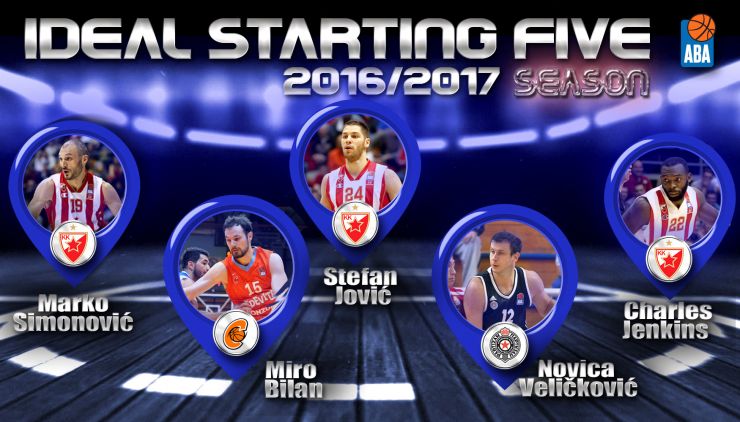 Crvena zvezda mts star player Stefan Jović is the player that received the highest % of combined votes of the head coaches, fans and the ABA League in the voting for the Ideal Starting Five of the 2015/16 season. He won the total of 13% and is followed by his teammates Marko Simonović (10.15%), and Charles Jenkins (9,35%), Miro Bilan of Cedevita (8.4%) and Novica Veličković of Partizan NIS (7,28%).

The members of the 2015/16 ABA League Ideal Starting Five are:

Stefan Jović – The maestro of Crvena zvezda mts' game was proving his quality throughout the season where he averages 7.2 points, 6.1 assists, 2.8 rebounds and 1.1 steals per game in the ABA League. He finished the regular season as the fifth best passer of the league and he also set the season's record in the number of asssits made in a single game – 16 in the game against Cedevita in Belgrade.

Charles Jenkins – The Crvena zvezda mts' fans' favourite has returned to the red and white squad this season and quickly proved why he was missed so much during the time that he was gone since he left the team. His athleticism combined with excellent defensive game, as well as precisiveness when shooting from long range (50% for 3 points) were the ones that gave the best placed team after regular season stability and he is one of the integral reasons why they finished on top with the best ever ABA League regular season win/loss record. Jenkins averages 9.2 points, 2.7 assists, 1.7 rebounds and 1.3 steals per game this season in the ABA League.

Marko Simonović – The Serbia national team small forward was killing the opponents all season long with his offensive contribution. At the moment he is the top scorer of Crvena zvezda mts with 10.4 points scoring per game, whilst adding 2.1 rebounds.

Novica Veličković – The big man was not on top in any of the statistical categories even at Partizan NIS, averaging 11.3 points, 5.2 rebounds and 1.3 assists per game in the ABA League, but the coaches and fans simply love him for his contribution on both sides of the court. His fighting spirit has become a true symbol of the modern Partizan NIS, which is still fighting for the top this season and that's why he was selected into the ideal starting five.

Miro Bilan – Cedevita and Croatia national team center has been a regular member of the ABA League Ideal Starting Five over the past years and this season is no different. The 2015/16 ABA League Regular Season MVP and the MVP of the 26th round this season has simply been proving dominance on the court against every opponent he met and he finished the regular season with the 7th highest index rating amongst all players (16.42 per game) and as seventh best rebounder (7 rebounds per game).