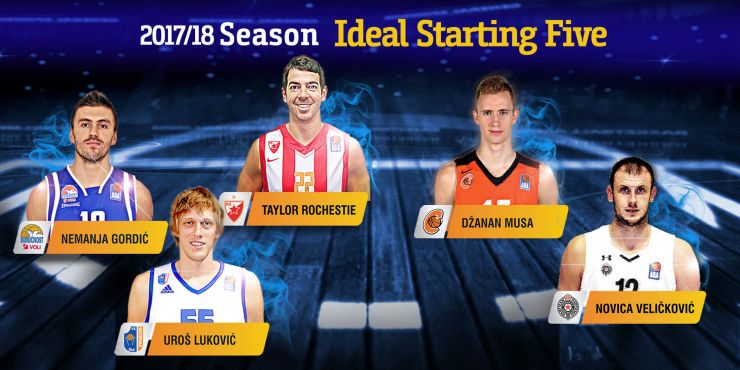 Crvena zvezda mts star player Taylor Rochestie is the player that received the highest % of combined votes of the head coaches, fans and the ABA League in the voting for the Ideal Starting Five of the 2015/16 season. He won the total of 10.5% and is followed by Uroš Luković (10.4%), Novica Veličković (9.9%), Nemanja Gordić (8.8%) and Džanan Musa (8%).

Taylor Rochestie – The excellent point guard arrived to Crvena zvezda mts last summer from Russian powerhouse Lokomotiv Kuban and has quickly became an invaluable part of the red and white squad. He has been averaging 15 points with a 48.8% shot from beyond the arc, while adding 6 assists, 2.7 rebounds and 1.2 steals to his stats. His average valuation is 18.6 and it seems that especially the head coaches value his qualities greatly, as they have given him the highest number of their individual votes, alongside Uroš Luković.

Nemanja Gordić – Budućnost VOLI have become one of the greatest revelations of the ABA League this season, as they have been on the very top of the standings for the majority of its regular part and no other than Nemanja Gordić was their leader on court. Excellent combo guard has been averaging 14.7 points, 2.5 rebounds, 4.6 assists and 1 steal this season for the valuation of 16.4 and for sure he deserves a spot in the ideal starting five of the season.

Džanan Musa – Džanan Musa has, in his third season with Cedevita, finally completely established his name on the regional basketball map, as he has shined throughout the season for the Jure Zdovc’s squad and officially became the Top Prospect of the ABA League for the 2017/18 season. The youngster has been leading Cedevita towards the Playoffs like a true experienced class player and while doing so, he has been averaging 13.6 points, 3.4 rebounds, 1.6 assists and 1.2 steals per game in the ABA League (valuation 15.9). His contribution has especially been noticed by fans, who have given him the highest number of individual votes in the voting for the Ideal Starting Five of the season.

Novica Veličković – Partizan NIS’ captain is the only player that has found his name on the Ideal Starting Five both for last and this season. He has without a doubt done so not only because of his skills, proven on court, but also for his passion for the game and for the black and white colours of his Partizan NIS. His contribution for his team has been enormous. He has been averaging 12.1 points, 5.3 rebounds, 2.4 assists and a valuation of 15.9 this season.

Uroš Luković – The Mornar’s big man has perhaps become the most positive surprise of the 2017/18 ABA League season and this has become evident in the coaches’ voting for the Ideal Starting Five, where he has been sharing the first place with Taylor Rochestie by the number of votes. Uroš Luković has been thrilling the crowds in the ABA League arenas with his high-flying dunks, blocks and other attractive stuff, while averaging 13.5 points, 7.5 rebounds, 1.1 assists and 2.4 blocks for the valuation of 20.7.