Cibona prevail in a thrilling game against Krka

The Wolves scored a very valuable home win in the last match of Round 7. 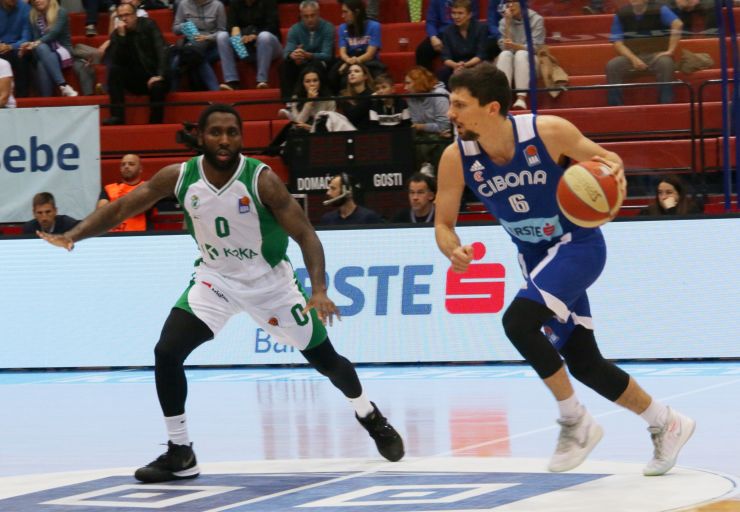 Game recap: Cibona have managed to take this precious win in the match against Krka, but only after going through a real drama late in the 4th quarter. Eventually, the home team captain Marin Rozić turned out to be the hero of the day for the Wolves, as he made the game-winning steal in the final moments.

Key moments: Cibona were up by 18 points in the 2nd quarter and it all looked like they would score an easy win in this match. However, the Wolves lost the 3rd quarter by 6:20 and therefore lost their big lead… Krka were up by 2 points in front of the final quarter – 48:46! Krka’s point guard Glenn Cosey was the man behind the comeback, as he finished the match with 31 points, including 7 three-pointers. However, he missed the most important of his 3-point shots.

Cibona were up by 67:65, with 40 seconds remaining on the game clock, when Cosey pulled up for a 3-pointer, but his shot never made it through the basket. On the other side of the court Shane Gibson scored both free-throws to double the lead of Cibona to 69:65, while Krka responded quickly via Ivan Ramljak who made the 2-pointer and reduced the gap to 69:67. The visitors then made a foul on Toni Katić who scored just 1 free throw for 70:67, with 7 seconds remaining on the game clock.

Krka had one last chance to take this win into overtime. The ball ended up in the hands of Krka’s sharp shooter Luka Lapornik, who ran all the way to the other side of the court, made a nice feint to trick his defender Marin Rozić and pulled up for a 3-pointer... But, Cibona’s captain then made the game-winning move. Despite losing his balance caused by Lapornik’s feint, he managed to make a quick move with his right hand and to steal the ball from his opponent right before his made the shot. The score remained 70:67 and Cibona took the win.

Man of the match: Filip Bundović led Cibona troops toward this win. He scored 19 points, had 6 rebounds, while his overall index rating was 25.

Can’t trick the stats: Krka were relying on their 3-point shot way too much. Yes, they scored 13 three-pointers, but they made 36 attempts! And at the end, their two most important 3-point shots did not made it through the basket.