Through 9 rounds, the average ABA League possession is worth 0.93 points. 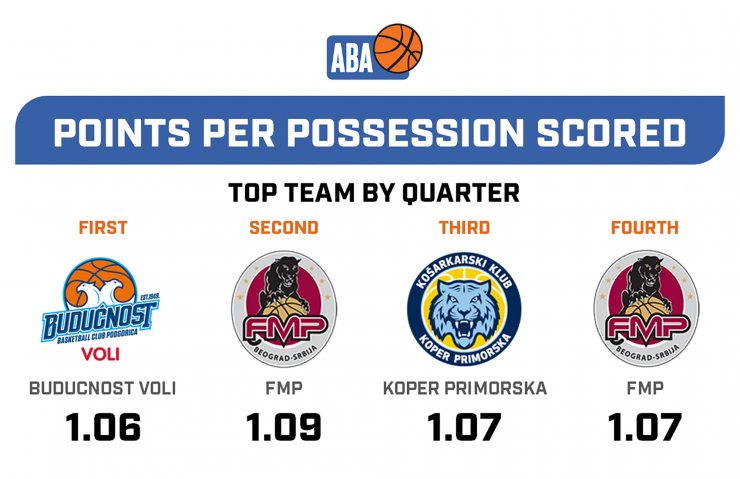 The ABA League average of 0.93 points per possession does not reflect the performance of the league’s top teams very well this season. Three teams are averaging over 1.00 points per possession on the offensive end, but several have been especially effective at different points in each game. A team’s rotation and strategy can impact how well they play over the course of games with some finding considerable success for certain stretches.

Q1: No team in the ABA League starts faster than Budućnost VOLI and much of that success can be attributed to their play in the pick and roll. Not only do their ball handlers often find results early in games, but those players get the team’s roll men involved consistently as well. Justin Cobbs and Scott Bamforth have been the team’s main weapons off the opening tip, but Hassan Martin has been extremely effective as well.

Q2: FMP does not rely heavily on any player in the second quarter—in fact they mix up their rotation to close the first half as much as almost any team in the ABA League. They are extremely efficient on the offensive end nonetheless due to the contributions of their deep bench. Players like Marko Jeremic, Marko Pecarski, Ilija Djoković, Marko Radovanović, and Stefan Momirov may not play big role offensively, but they all rank in the top 20% of all ABA League players in efficiency taking advantage of the opportunities they do earn. FMP has 10 players that have scored over 10 points in second quarters this second and none the have scored over 25.

Q3: Koper Primorska ranks 6th in overall offensive efficiency this season, but they come out of half time shooting the ball better than any other ABA League team. Collectively shooting an eFG% of 71% in spot up situations in the third quarter, Primorska has shot the lights out. Marko Jagodić-Kuridža and Lance Harris have been especially effective, but the team’s ability to move the ball to create catch and shoot opportunities has shined as well.

Q4: A big part of FMP’s success in the standing this year has been because of the way they have closed games. Shooting 83% from the free throw line while finding success in one-on-one situations, FMP has been able to lean on their ability to exploit matchups and stretch leads when they can get opponents in foul trouble. Stefan Djordjević has been especially steady around the basket doing some of his best work late in games.