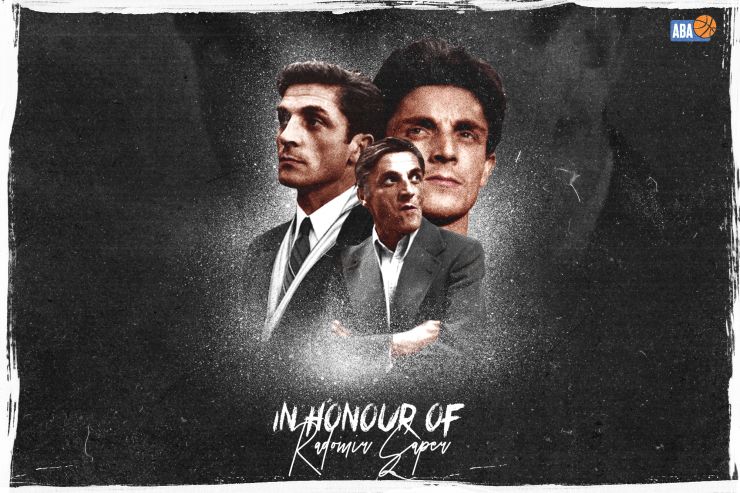 With a PhD in Technical Sciences, Šaper (1925-1998) was a professor and Associate Dean at the Faculty of Technology and Metallurgy of the University of Belgrade. Still, that was only his job, while his greatest love and passion had always been basketball.

Not many professors can say that they had such a good basketball career as Šaper had. He played for the two most popular clubs in Belgrade – Crvena zvezda and Partizan, while he was also a member of the Yugoslav national team, together with other basketball legends such are Borislav Stanković, Nebojša Popović and Aleksandar Nikolić. And, these four extraordinary people have changed the whole history of basketball in this region.

In 1953, Radomir Šaper, Borislav Stanković, Nebojša Popović and Aleksandar Nikolić, all active athletes whose playing careers were in decline or completely over, decided to join the Basketball Association of Yugoslavia. This group of well-educated men and true basketball lovers had the same goals, ideas, ambitions and strengths to turn their fantasies of achieving European and global heights into reality. Thus, the strategy to take Yugoslav basketball to the top was set in stone.

The new management, with Radomir Šaper as the official leader of the Technical Secretariat, have decided to apply for organization of the twelfth European Championship, which was scheduled to take place in 1961. Yugoslavia was eventually selected as the host for this event, while its team managed to reach the finals against the then-invincible team from the Soviet Union. After an epic struggle, Yugoslavia was defeated, thus winning the silver medal.

This was the first medal in the history of Yugoslav basketball. After that, Yugoslavia started winning the medals on a regular basis, while basketball has become one of the most popular sports among people.

In late February 1965, Radomir Šaper was elected as President of the Basketball Federation of Yugoslavia. Šaper has been the president of the Basketball Federation of Yugoslavia until 1973, when he was appointed as secretary general. He was also the commissioner of the Yugoslav Basketball Cup and the creator and initiator of the YUBA League, a national championship organized and conceived to be the strongest tournament in the world after the American NBA.

At the Congress of the International Basketball Federation (FIBA) held on 24 August 1972, Radomir Šaper was elected president of its Technical Commission, a position in which he remained until his death in 1998. Together with Bora Stanković, he was a member of the Central Board. His contributions to the development and improvement of basketball in the world were invaluable, including introduction of new and innovative rules and improvement in the quality of refereeing.

His invaluable contribution to the promotion of basketball rules at the international level has often been acknowledged. Since 2001, FIBA has handed out the “Radomir Šaper” award for significant contributions to furthering basketball in the world. FIBA also posthumously awarded Šaper its Order of Merit.

And on 1 March 2007, in Alcobendas, Spain, the FIBA Hall of Fame opened. Together with 38 others honored were five basketball players, coaches, referees and basketball officials from Serbia who had contributed greatly to the sport of basketball. One of them was Radomir “Raša” Šaper.