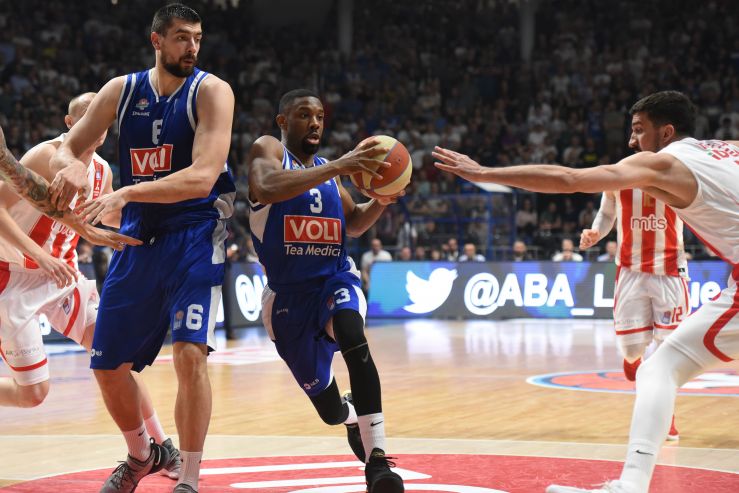 Game recap: Game 5 will decide who will be the 2018/19 ABA League champion! Budućnost VOLI defeated Crvena zvezda mts in Game 4 in Podgorica, which means that the score in this series is now all tied - 2-2.

Game 5 of the 2019 ABA League Finals will be played in on April 22, while Crvena zvezda mts will have a home court advantage in that match. Whoever wins that match will clinch the championship trophy.

Key moments: And once again Budućnost VOLI have made a big comeback to score the win. The home team were down by 10 points in the 3rd quarter, however they managed to reduce the gap to just 1 point before the start of the 4th quarter and then to prevail in a thrilling ending. Crvena zvezda mts had the lead 72:70, with 3 minutes left on the game clock, but then Budućnost VOLI made the key 9:0 run and went in front – 79:72. There was simply not enough time for the visitors to get back in this match.

Man of the match: Norris Cole have done it again! This 30-year old point guard scored 31 points, had 6 rebounds and 6 assists, while his overall index rating was 36!

Can’t trick the stats: Like in the previous match, Crvena zvezda mts crew had problems with turnovers. They made 14 of them this evening.

Match: Budućnost VOLI - Crvena zvezda mts
Join thousands of ABA League fans in our digital community by liking us on Facebook, following us on Twitter or Instagram and subscribing to our YouTube channel.
If you like this and our other articles, make sure to sign up for the ABA League newsletter. You will be notified regarding all important news and updates on the ABA League via e-mail.
Social Media
Tweets by ABA_League