On this day, back in the 2006, FMP have climbed atop of the ABA League competition, as they have edged out Partizan in the Final of the Final Eight Tournament in Sarajevo. 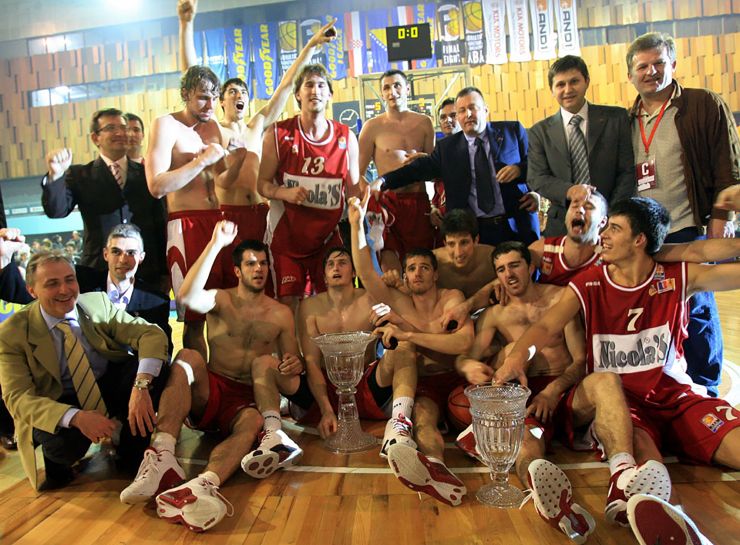 The 23 April of 2006 will remain written with golden letters in the history books of the FMP, as they have prevailed over Partizan in the Final of the Sarajevo Final Eight Tournament for the 2005/06 season and won their second ABA League trophy in their club’s history. It’s so far as well their last regional competition trophy achieved until this day.

It has been a beautiful Cinderella story for all of the fans of the Panthers, as the squad composed of Nikola Vasić, Branko Cvetković, Zoran Erceg, Branko Jorović, Mile Ilić, Bojan Krstović, Miljan Pupović, Marko Marinović, Ivan Todorović, Aleksandar Rašić, Duško Savanović and Predrag Samardžiski and led by Vladimir Vukoičić from the bench, haven’t been seen as the top contenders for the trophy, even though they have become the ABA League champions two seasons earlier. The reason is of course that they have finished the regular season only in the third position, behind the city rivals of Partizan, which finished first and Crvena zvezda, which finished second.

At the Final Eight tournament, FMP first met with Vojvodina Srbijagas in the Quarter-finals and took the victory after a tight game with the final score of 95:93, with Branko Cvetković leading the way in scoring with 18 points scored for the Panthers.

Afterwards, they were about to face Crvena zvezda, which eliminated the hosts Bosna ASA BHT in the Quarters easily with the score of 86:74. It seemed like FMP saved the best for this game, as they have demonstrated a true rhapsody in the Semi-finals, beating Crvena zvezda 103:78. Nikola Vasić was the hero of the squad, led by head coach Vladimir Vukoičić, with 19 points on his record. Branko Cvetković again demonstrated a good performance, as he contributed 16 points.

A big Final game against the first-placed team after the Regular Season, Partizan of Belgrade, followed and everyone was expecting a routine job for the black and white, which have appeared in their second consecutive Final. The squad, led by Duško Vujošević, have not only been the best in the Regular Season, but have also swept with their competition at the Final Tournament, on their way towards the Final. They have outgunned Zadar 93:81 in the Quarter-finals and the reigning champions Hemofarm 88:66 in the Semi-finals.

However, FMP had different plans. With excellent second quarter (22:14), they prevailed in the first half by 7 points (36:29). Even though Partizan fought hard in the final quarter in order to turn the game upside-down, they just did not manage to do it. FMP won 73:72 after a thrilling finish, just like two seasons before.

This time, Bojan Krstović and Marko Marinović were the heroes of the FMP squad, as they have contributed 15 points each for the win of their team. Duško Savanovič added 14.