On this day, back in the 2010, Dušan Kecman has scored an unforgettable full-court game-winning three-pointer for the victory of Partizan in the season Final in Zagreb against Cibona. Partizan NIS won their fourth regional league trophy in club’s history. 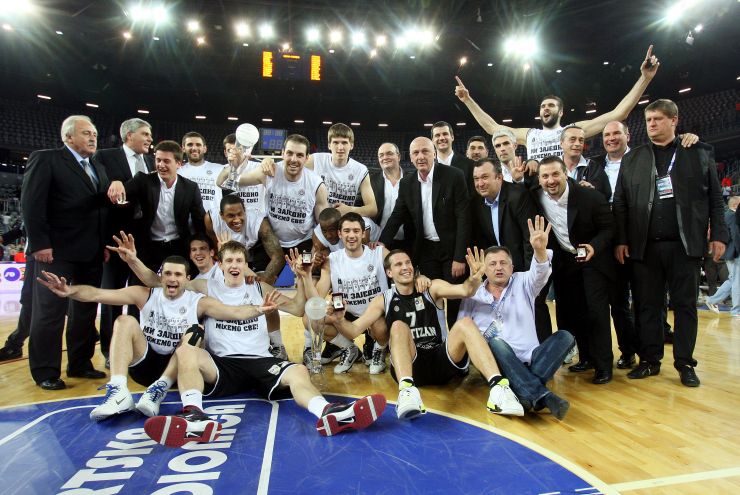 Not many events have raised so many eyebrows in the entire basketball history of the region, as the 2010 Final game of the ABA League season in Zagreb Arena between Cibona and Partizan. It has been an event eagerly awaited by the entire basketball region and in the end, nobody was really disappointed with the show.

It has been a season to remember, as Cibona and Partizan were battling all Regular Season long for that spot at the top of the regional league standings and both of them finished the 26 games with 20 victories on their record, with Cibona taking the first place after the regular part of the season due to the better score difference.

The Final Four tournament was set to take place in the newly-built beautiful and colossal Zagreb Arena, with Cibona being the hosts of the tournament.

In the Semi-final the hosts jumped over Union Olimpija with the score of 78:73, while Partizan were better than Hemofarm Stada in the other Semi-final pair. Lawrence Roberts was the one to shine for the black and white in the Semi-final clash, as he had a double double, with 16 points and 11 rebounds on his record. He was followed by excellent point guard Lester McCalebb, who added 11 points.

Everything was ready for another big showdown of Cibona and Partizan, the two best teams of the Regular Season and the two teams that have also faced each other in the Final a season before, but this time the venues were switched and Cibona were the hosts.

And in the end, the Final was simply spectacular. 16,200 fans have withessed anybody’s game of two rivals that were pretty equal all season long and with the score of 60:60 the game went to – overtime. The game stayed tight as ever all until final moments and when youngster Bojan Bogdanović scored a three-pointer for Cibona in the final second, the crowd was ecstatic. Cibona were up 74:72 and nothing seemed to could get into their way on their path to their first regional league trophy.

However, the impossible followed. With 0.6 seconds remaining on the game clock, Dušan Kecman took the ball under his own basket, fired a shot and scored an impossible full-court game-winning three-pointer off the backboard, to hand the squad, led by Duško Vujošević from the bench, their fourth consecutive ABA League trophy.

For the winning side, Aleksandar Marić led the way in scoring with 14 points, while adding 11 rebounds to his stats.

Lawrence Roberts followed with 13 points and Petar Božić with 11. Dušan Kecman also finished the game in the double digits. On the other side, Jamont Gordon and Marko Tomas were brilliant, as each of them contributed 31 points, but their flamboyant performances just weren’t enough for the trophy.