On this day, back in the 2013, Partizan mt:s have triumphed over Crvena zvezda Telekom in the Final of the ABA league 2012/13 season in Laktaši Sports Hall and won their sixth regional league trophy and so far their last trophy of the regional club champions. 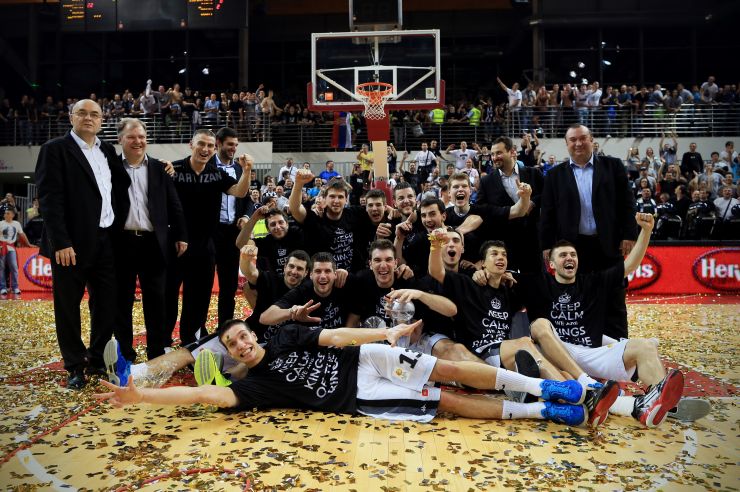 Today, seven years ago, Partizan mt:s have made a huge job, as they have retured to the regional league top after a year of break, when Maccabi Electra reigned the competition.

The black and white, again led from the bench by head coach Duško Vujošević and with players Joffrey Lauvergne, Nikola Milutinov, Leo Westermann, Nemanja Gordić, Vladimir Lučić, Dragan Milosavljević, Bogdan Bogdanović, Đorđe Gagić, Dejan Musli, Marko Čakarević, Branislav Đekić and Davis Bertans on court, have not been seen as a clear favourites for the throne, as they have headed to the Final Four tournament in Laktaši, as they did not shine throughout the Regular Season.

In fact, Belgrade powerhouse finished fourth after 26 rounds, having won only 16 out of their 26 games in the first phase of the season. Igokea have finished the Regular Season as the first-placed team with 20 wins, ahead of Crvena zvezda Telekom (18) and Radnički of Kragujevac (17).

In the Semi-finals, Crvena zvezda Telekom came out on top against Radnički 79:78 after a dramatic encounter. In the other Semi-final pair Partizan mt:s prevailed over Igokea 63:57, led by Davis Bertans, who had 15 points, while Joffrey Lauvergne followed him with 12 points on his record and Vladimir Lučić with 11.

The big Final was up on Saturday night in Laktaši and it was a packed arena, divided into black and white and red and white halves.
Crvena zvezda Telekom were up by 7 points at halftime (25:32), but the black and white made a huge comeback in the third quarter, which they have won by 12 points and turned the game completely upside-down. In the final ten minutes, they have continued to grind and prevailed comfortably in the end with the final score of 71:63.

Leo Westermann and Davis Bertans were the key players for Duško Vujošević’s squad, as they led the way in scoring for them with 15 points apiece. They wre actually the only players of their team, to finish the game in the double digits. Dejan Musli had 9 points and young gun Bogdan Bogdanović 8. For Zvezda, Raško Katić had 19 points, while Igor Rakočević and DeMarcus Nelson contributed 14 points each.

This continues to be remembered as the last regional league trophy that Partizan have won. At least for now.