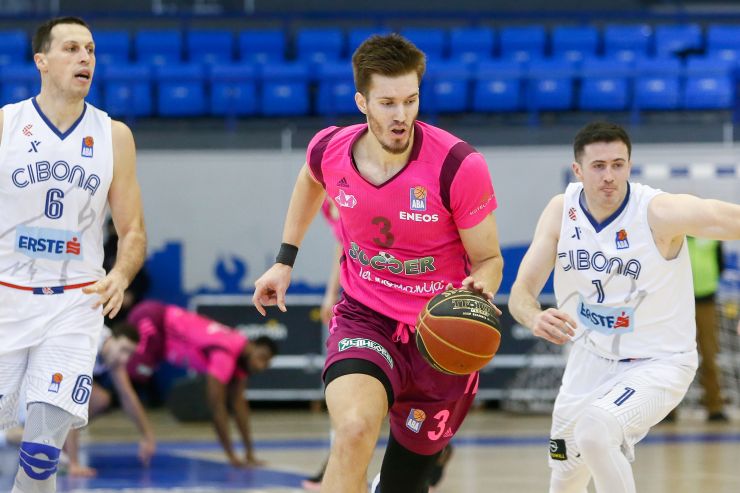 Also, we have to mention that Josip Bilinovac made one of the most spectacular 3-points shots of this season as he hit a full-court three-pointer at the halftime buzzer. Take a look.

Key moments: Mega Soccerbet had a win in their pockets. They were up by 3 points – 71:68 and had a ball-possession with less than 30 seconds remaining on the game clock. However, Mateo Drežnjak stole the ball from Milenko Tepić and made a lay-up in the fast break to reduce the gap to just a single point – 71:70.

Cibona then quickly made a foul on Mega's point guard Dayshon Smith who had two free throws on 10 seconds before the end of the game. Smith made the first one – 72:70, but he missed the second free throw and Cibona players grabbed the ball. Roko Prkačin made a run toward the other side of the court, while then Mega’s player Stefan Momirov made a huge mistake as he made an unsportsmanlike foul on Prkačin. However, Cibona’s youngster was not concentrated enough in key moments. He missed one of his two free throws and failed to tie the score – 72:71, while after that he missed a 2-point jumper at the 4th quarter buzzer which would have won the game for his team.

Man of the match: Mega Soccerbet's twin towers Filip Petrušev and Marko Simonović were brilliant once again. Petrušev finished the match with 22 points and 7 rebounds, while Simonović had 20 points and 9 rebounds. Both of them deserve the MVP of the match award .

Can’t trick the stats: Although Josip Bilinovac made that unbelievable 3-pointer at the halftime buzzer, that was one out of only 3 three pointers Cibona have made in the entire match. This was simply not their best shooting performance.

Click here for more match stats
Match: Mega MIS - Cibona
Join thousands of ABA League fans in our digital community by liking us on Facebook, following us on Twitter or Instagram and subscribing to our YouTube channel.
If you like this and our other articles, make sure to sign up for the ABA League newsletter. You will be notified regarding all important news and updates on the ABA League via e-mail.
Social Media
Tweets by ABA_League