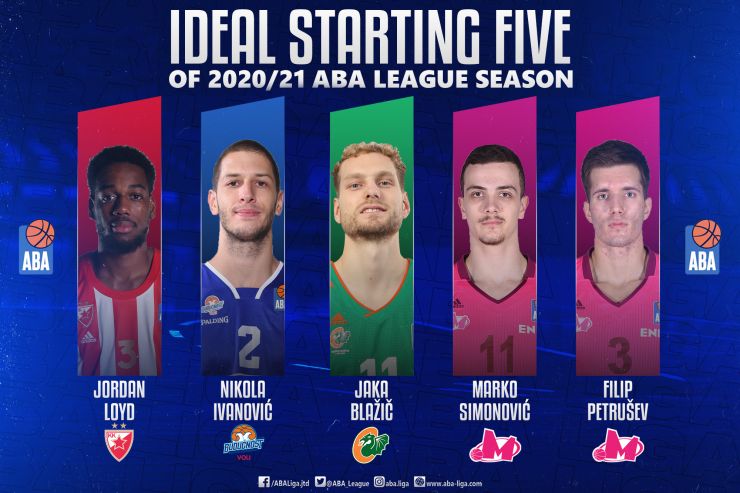 Mega Soccerbet rising star player Filip Petrušev is the player that received the highest % of combined votes of the head coaches, journalists and fans in the voting for the Ideal Starting Five of the 2020/21 season. He won the total of 16.2% votes and is followed by Jordan Loyd (15.8%), Jaka Blažič (14.8%), Marko Simonović (8.2%) and Nikola Ivanović (6.8%).

Jordan Loyd – The American sharp-shooter has been the key figure for Crvena zvezda mts this season, as he led the Belgade Red & White towards the first place in the ABA League Regular Season. He has been averaging 15.3 points, 3 assists, 2.3 rebounds, 1 steal and a valuation of 15.5 per game and has deservedly found his place in the ABA League 2020/21 season Ideal Starting 5!

Nikola Ivanović – The combo guard has had a great ABA League Regular Season campaign with Budućnost VOLI in which the Podgorica squad have been hoping to grab the top spot in the standings all until the end of the Regular Season. The Podgorica-born player has been named MVP of March previously and has been averaging 13.1 points, 4.5 assists, 2.9 rebounds, 1.5 steals and a valuation of 18.2 per game throughout the season and earned himself the position amongst the best five players of the Regular Season.

Jaka Blažič – The Slovenian international has been the undisputed leader of Cedevita Olimpija this season, that have been fighting for a Playoffs spot all until the end and have failed to do so just in the final rounds. Blažič, however, has had probably his best ABA League season so far, in which he has been selected the MVP of the month twice, in the months of November and January. He has been aveaging 17.2 points, 4.3 rebounds, 3.6 assists, 1.1 steals and a valuation of 18.5 per game and therefore it is no surprise that he has found his spot in the Ideal Starting Five.

Marko Simonović – The Montenegrin big guy, that has started his ABA League career with Petrol Olimpija and moved to Mega Soccerbet last season, has been shining throughout the Regular Season and his stellar performances, that helped him being selected at the NBA Draft did not go unnoticed with the ABA League fans, head coaches and journalists either. He has earned himself a spot in the Ideal Starting five with an average of 15.8 points, 9 rebounds, 1.8 assists, 1 steal and a valuation of 19.2 per game in the Regular Season.

Filip Petrušev – The Mega Soccerbet big man has had truly a remarkable season, his first ever in the ABA League. He has not only been named the MVP of the month twice, in October and December, but has also taken the awards for the Regular Season MVP, Top Prospect and Top Scorer. The 21-year old has been averaging 23.7 points, 7.6 rebounds, 1.6 assists and 1.1 blocks per game. Therefore, it comes as no surprise, that he has gained the highest number of combined votes by the ABA League head coaches, journalists and basketball fans in the voting for the Ideal Starting Five.

Ideal Starting five awards so far in the regional league: