Crvena zvezda mts have kept the perfect score in the 2021/22 AdmiralBet ABA league regular season as they defeated their big rivals Budućnost VOLI in this week's match of the round. 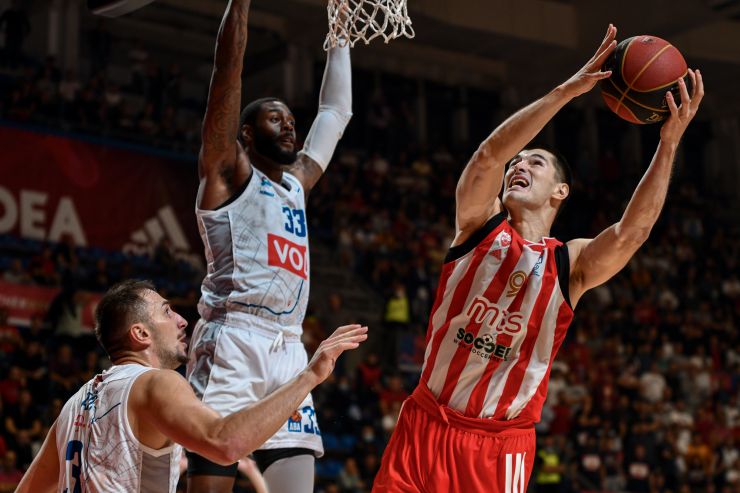 Game recap: Crvena zvezda mts have kept the perfect score in the 2021/22 AdmiralBet ABA League regular season as they defeated their big rivals Budućnost VOLI in this week's match of the round.

It was a very tough game in which both teams presented some very good defensive performance. Crvena zvezda mts were better in the 1st half as they had an 8-point lead at the halftime - 37:29, however then Budućnost VOLI turned the things around the 3rd quarter as they won that period by 18:8.

Still, the red-and-whites had enough strength to make the final blow in the last and decisive quarter. Crvena zvezda mts opened that period with 13:0 run to regain the lead and they had no problems staying in front until the end.

Crvena zvezda mts now have the overall score of 2-0, while Budućnost VOLI are at 1-1.

Key moments: Crvena zvezda mts were down by two at the end of the 3rd quarter – 45:47, but then the home side made a flying start in the 4th quarter as they locked all the doors toward their basket. The red-and-whites haven’t conceded a single point in the first 4-and-a-half minutes of the 4th quarter! During that period Zvezda’s troops made the key 13:0 run to get back on a double digit lead – 58:47.

Man of the match: Crvena zvezda mts power forward Luka Mitrović just loves playing big games. This evening he scored 19 points for the winning team, he also made 7 rebounds, while his overall index rating was 21.

Can’t trick the stats: Crvena zvezda mts played more as a team than their opponents in key moments of this match. After all, Zvezda finished this match with 20 team assists, while Budućnost VOLI made just 12 for the entire match.

Click here for more match stats
Match: Crvena zvezda mts - Budućnost VOLI
Join thousands of ABA League fans in our digital community by liking us on Facebook, following us on Twitter or Instagram and subscribing to our YouTube channel.
If you like this and our other articles, make sure to sign up for the ABA League newsletter. You will be notified regarding all important news and updates on the ABA League via e-mail.
Social Media
Tweets by ABA_League