Mega Mozzart have ended their losing streak in style as they defeated last season's finalists Budućnost VOLI in Belgrade in Round 7 of the 2021/22 AdmiralBet ABA League championship. 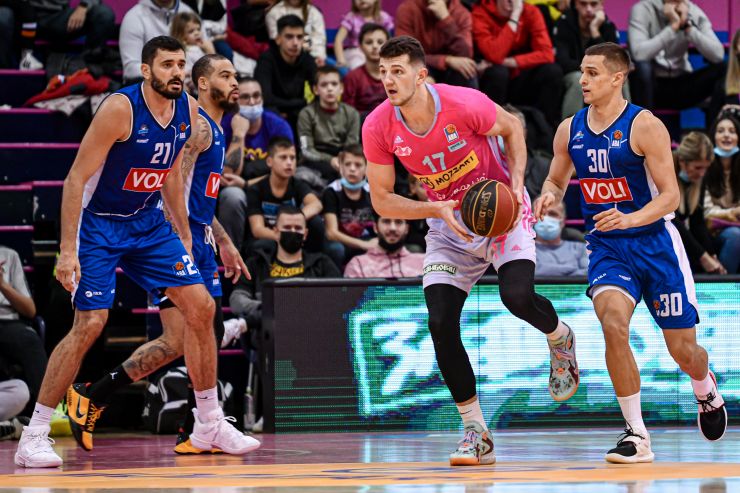 Game recap: Mega Mozzart have ended their losing streak in style as they defeated last season's finalists Budućnost VOLI in Belgrade in Round 7 of the 2021/22 AdmiralBet ABA League championship.

The Pink troops have played probably their best game of the season. They have been in front throughout the whole game, while in the final moments they successfully denied all attempts of the visiting side to change the outcome of this match. Still, many will wonder, what would have happened if Vladimir Micov had scored an open 3-pointer, two minutes before the end...

Mega Mozzart have therefore scored their 3rd win in the season and they now have the overall score of 3-4, while on the other side Budućnost VOLI suffered their 2nd defeat and their current season score is 5-2.

Key moments: Mega Mozzart had a fantastic 2nd quarter in which they scored 32 points and after which they were up by 17 points – 55:38. But, the game was still far from over. Budućnost VOLI bounced back on their feet in the 2nd half and bit by bit they started melting the gap. The visiting side have reduced Mega’s lead to 6 points several times during the 2nd half, while after Vladimir Micov scored a 3-pointer just two minutes before the end of the game, Budućnost VOLI came just 5 points behind their rivals – 82:77.

The following play was crucial in this game. Immediately after Mega Mozzart troops started their offensive play, Micov managed to steal the ball and to have a wide-open 3-point shot. However, Micov missed the shot and Mega Mozzart survived the late drama in Mega Factory Sports Hall.

Man of the match: Mega Mozzart’s 20-year-old hot prospect Karlo Matković will remember this game for a long time. He scored career-high 26 points, had career-high 12 rebounds and career-high 5 assists, while he also recorded his career-high index rating of 40!

Can’t trick the stats: Budućnost VOLI scored just 3 three-pointers for the entire game and that was not even the main problem for the visiting side today. Budućnost VOLI made just 18 rebounds, while on the other side Mega Mozzart team made 34 rebounds.

Click here for more match stats
Match: Mega Mozzart - Budućnost VOLI
Join thousands of ABA League fans in our digital community by liking us on Facebook, following us on Twitter or Instagram and subscribing to our YouTube channel.
If you like this and our other articles, make sure to sign up for the ABA League newsletter. You will be notified regarding all important news and updates on the ABA League via e-mail.
Social Media
Tweets by ABA_League