After Round 4 of the regular season, we know 3 out of 4 teams that will play at the final tournament of the 2021/22 U19 ABA League Championship. Those are U19 SC Derby. U19 Mega Mozzart and U19 Igokea. 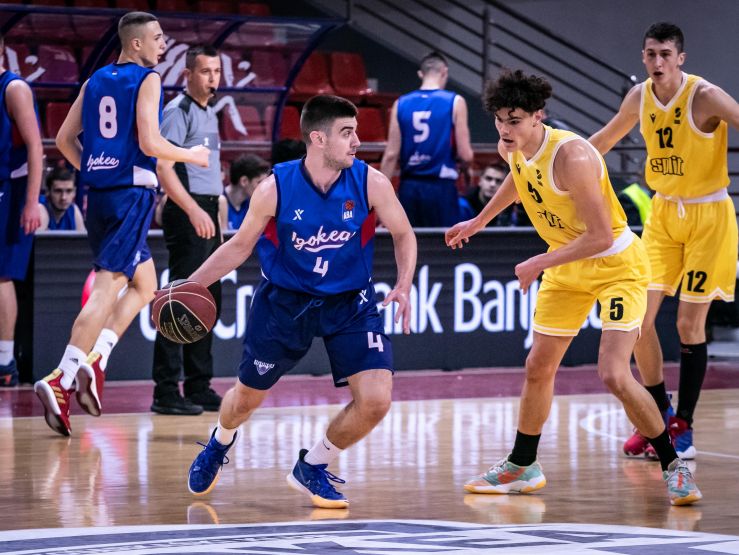 U19 Mega Mozzart keep on grinding! They are undefeated after three rounds of the 2021/22 U19 ABA League Championship campaign and it has been U19 Cedevita Olimpija, that they have prevailed over in their last contest.

The Belgrade side took control of the game quickly, leading by 6 points after the opening quarter, but in the first half, U19 Cedevita Olimpija kept coming back in the game. Still, U19 Mega Mozzart have departed to the big break with the advantage of 14 points (42:28) and their run late in the first half was crucial for later development of the game. After the big break, U19 Mega Mozzart have quickly crossed the 20-point margin and calmly cruised towards the win at the end of the game with the score of 106:63.

After their Round 3 defeat by U19 Borac of Čačak, U19 Spars got back onto the winning track already in Round 4, as they have prevailed over U19 Cibona in Group A game in Topolica Sports Hall in Bar, achieving their third win of the tournament, while U19 Cibona continue with one.

It seemed like it would be a one-sided contest right from the beginning, as U19 Spars have created themselves a 20-point advantage already in the opening quarter, as they went up 25:5 in the 8th minute. However, Cibona fought back and when the two squads departed to the big break, the lead by Spars was only 4 points (37:33). In the third quarter Spars pulled away again, this time for good. They won the third quarter by 7 points and led by 11, heading into the last quarter, when they have finally prevailed with the score of 79:69.

U19 Cedevita Olimpija have scored their 2nd win in the regular season of the 2021/22 U19 ABA League Championship as they prevailed over U19 Borac.

As you can see by the final score, U19 Cedevita Olimpija presented quite a powerful display this Saturday evening in Bar. And once again, it was Saša Ciani who led the Dragons toward the victory. Ciani put up another impressive performance in this season as he finished the match with 29 points and 13 rebounds! His overall index rating today was 38.

On the other side, Luka Andrić made 17 points and 9 rebounds for U19 Borac.

U19 Cedevita Olimpija and U19 Borac are now all tied on the standings as they both have the overall score of 2-2.

U19 Mega Mozzart have kept their perfect score in the 2021/22 U19 ABA League regular season as they scored a convincing win against U19 Mornar-Barsko zlato in Round 4.

U19 Mega Mozzart have therefore qualified for the final tournament, while the only question remains whether the Pink troops will finish the regular season at the 1st or at the 2nd place of Group A. If U19 Mega Mozzart win the last-round match against U19 Spars then they will claim the top spot, while if they lose the game then they will enter the final tournament as the 2nd placed team of Group A.

The reigning champions had an easy job against U19 Mornar-Barsko zlato in today’s match. The winner was decided already in the opening 20 minutes as Mega’s kids scored no less than 62 points in the 1st half.

In the battle of so far undefeated teams, U19 SC Derby have come up with an impressive second half performance to show off U19 Igokea in Laktaši. Therefore, the Podgorica squad remain the only undefeated team of the Group B.

In the opening half, Igokea were the ones to control the action on court, as they were up by 3 points after the opening quarter and by 6 at the big break. However, in the second half, U19 SC Derby completely dominated the court and turned the game upside-down already in the third. They entered the final period with a 2-point lead and secured themselves an 100:88 win in the end.

U19 Zadar have grabbed their second win of the Group B tournament in the 2021/22 U19 ABA League Championship, as they have rolled over U19 Partizan NIS in Laktaši.

It has been a fairly-one way traffic, mostly due to the fact that U19 Partizan NIS had only 6 players at their disposal this time, so they could truly resist the hard rhythm of the game, imposed by U19 Zadar for only a quarter. After 10 minutes U19 Zadar have been ahead by only a point, but it rose to 13 points by halftime. When Dalmatians have prevailed by 20 points in the third quarter alone, it became clear which way the game was heading. The final score was 102:46.

Gabrijel Karamarko shined for U19 Zadar as he steered them towards the win, as he had 22 points, 8 assists and a valuation of 33 on his record.

U19 SC Derby have become the first team to advance to the 2021/22 U19 ABA League Championship Final Tournament as they defeated U19 Krka in Round 4. U19 SC Derby have won all of their 4 games so far at the tournament in Laktaši and they have sealed the 1st place in Group B.

The clash between U19 Krka and U19 SC Derby was one of the most exciting games of the regular season so far. U19 Krka have been in front from the start all the way until the final seconds of the 4th quarter when they made a series of mistakes that cost them the win.

Firstly, U19 Krka players left U19 SC Derby star player Zvonimir Ivišić wide open in the corner and he made the key 3-pointer to tie the score – 84:84, just 15 seconds before the end. After that, one of U19 Krka’s best players in this tournament Rok Zaman missed a lay-up, while then Aleksandar Hočevar made a terrible mistake as he made an unsportsmanlike foul on U19 SC Derby player Danilo Ivanović, just two-and-a-half seconds before the end. Ivanović made 1 out of 2 free throws – 85:84, while after that he was fouled once again and this time he made both free throws to make the final score – 87:84.

U19 Igokea became the 3rd team to qualify for the final tournament of the 2021/22 U19 ABA League Championship as they scored a convincing win over U19 Mornar-Barsko zlato in Round 4.

The boys from Laktaši presented another excellent performance, while their offense worked perfectly tonight. They scored 105 points in this match, with 5 players reaching double digits, while their top scorer was Vuk Bošković who made 26 points.

On the other side, U19 Split had 4 players with 10+ points in this match, while their top scorers were Duje Lisica, Luka Nejašmić and Fabian Šiško who scored 14 points each.

U19 Igokea will finish the regular season at the 2nd place of Group B, which means that they will play against the 1st placed team of Group A in the semi-finals of the final tournament.