In the dramatic ending of the Game 2 of the AdmiralBet ABA League Semi-finals, Cedevita Olimpija have prevailed over Crvena zvezda mts, tied the series to 1:1 and forced Game 3, that will take place in Belgrade. 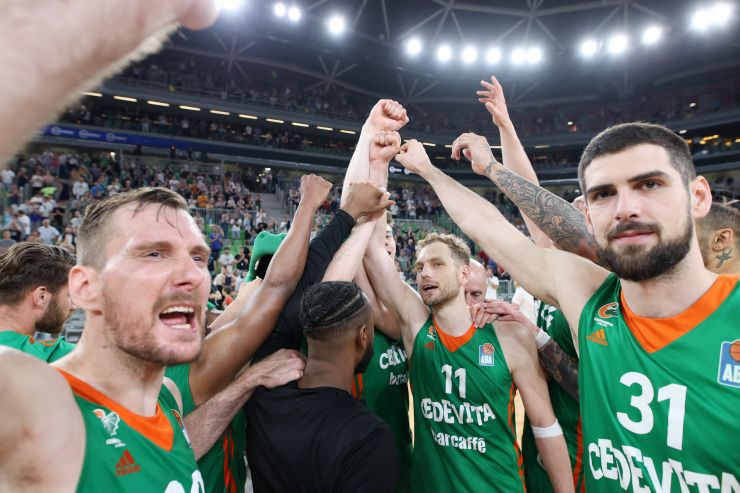 Game recap: In the dramatic ending of the Game 2 of the AdmiralBet ABA League Semi-finals, Cedevita Olimpija have prevailed over Crvena zvezda mts, tied the series to 1:1 and forced Game 3, that will take place in Belgrade. After a fantastic game in front of the league season-record 9435 fans in Stožice Arena, with many ups and downs it all came down to overtime, where the Dragons eventually prevailed and celebrated an 88:80 win in the end.

Key moments: Cedevita Olimpija were up by no more than a point with 75 seconds remaining, but then Zach Auguste scored at the entrance to the final minute, to put his Cedevita Olimpija up 74:71. Crvena zvezda mts had the final ball possession with 3 points of deficit and it has been Luka Mitrović, who scored while drawing the foul, to force overtime with the score of 76:76. In the extra time, however, the hosts dominated the court and prevailed with the final score of 88:80.

Man of the match: Edo Murić was the driving force of Cedevita Olimpija this time, as he led his team to the win with 21 points, 7 rebounds, 1 block and a valuation of 27. He is our man of the match!

Can’t trick the stats: Cedevita Olimpija has had 11 turnovers and Crvena zvezda mts 18 and that’s what has been crucial for the outcome of the clash.

Click here for more match stats
Match: Cedevita Olimpija - Crvena zvezda mts
Join thousands of ABA League fans in our digital community by liking us on Facebook, following us on Twitter or Instagram and subscribing to our YouTube channel.
If you like this and our other articles, make sure to sign up for the ABA League newsletter. You will be notified regarding all important news and updates on the ABA League via e-mail.
Social Media
Tweets by ABA_League