In the decisive third game of the AdmiralBet ABA League Semi-finals, Crvena zvezda mts have outgunned Cedevita Olimpija and have earned themselves a spot in the Finals. 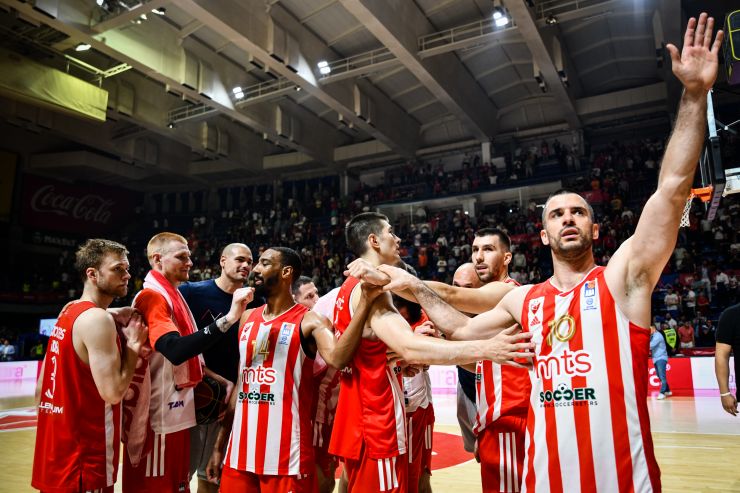 Game recap: In the decisive third game of the AdmiralBet ABA League Semi-finals, Crvena zvezda mts have outgunned Cedevita Olimpija and have earned themselves a spot in the Finals. The red and white have been a dominant force throughout the majority of the game game, were in front through the entire playing time and have deservedly entered the Finals of the 2021/22 season, making it the seventh straight Finals appearance for the red and white in the regional competition. Cedevita Olimpija, on the other side, end their AdmiralBet ABA League season in the Semi-finals, which is the best result for the Ljubljana club since the merger of Petrol Olimpija and Cedevita Zagreb in 2019.

Key moments: After Crvena zvezda mts have already been up by 19 points midway through the second quarter (37:18), Cedevita Olimpija fought back and cut the gap to only 4 points in the ending of the first half and as the two sides departed for the big break, the margin was only 5 points (42:37). However, Crvena zvezda mts opened the second half with an 8:0 run in the opening 2 minutes, that put them up by 13 points again (50:37). Cedevita Olimpija fought back again and cut the gap to 6 points again 50:44, but Zvezda replied with a 17:3 run to take a 20-point lead (67:47). The battle for the Finals was over.

Man of the match: Nikola Ivanović was the key to Crvena zvezda mts’ victory this time, as he led the red and white to the Finals with 11 points, 6 assists, 2 steals, 1 rebound and a game-high valuation of 17. He is rightfully our man of the match.

Can’t trick the stats: Crvena zvezda mts have simply dominated the glass this time. They had 29 rebounds and Cedevita Olimpija 21. That’s what turned the flow of the game their way.

Click here for more match stats
Match: Crvena zvezda mts - Cedevita Olimpija
Join thousands of ABA League fans in our digital community by liking us on Facebook, following us on Twitter or Instagram and subscribing to our YouTube channel.
If you like this and our other articles, make sure to sign up for the ABA League newsletter. You will be notified regarding all important news and updates on the ABA League via e-mail.
Social Media
Tweets by ABA_League