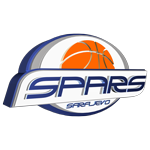 BEGINNINGS: The club was founded in Sarajevo in 2005 and has quickly established itself as the cradle of domestic talent, as they have produced several notable names like Đoko Šalić, Adin Vrabac, Nedim Buza, Stefan Glogovac, Aleksej Nikolić, Amar Gegić and others. It has been the most dominant club in the BiH over the past seven years, when it comes down to youth categories. They have also participated at 7 EuroLeague Next Generation Tournaments and also reached the final tournaments in 2013 and 2015.

GLORY DAYS: Since 2012, Spars have been members of the BiH first division of club basketball and have always been in the battle for the trophies. In 2012 they have reached the finals of the domestic championship. However, the true peak of the club’s history dawned in 2018, when they joined the ABA League 2.
Club Information
 OKK Spars Realway, Sarajevo