Through 4 rounds, 3 ABA League teams have stood out and 6 have positive efficiency differentials. 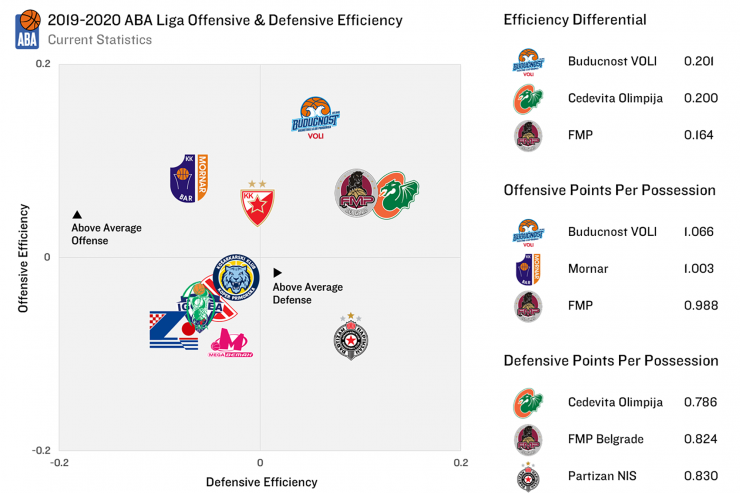 The ABA League season is still in its early stages, but a few teams have been playing especially well. The graph above places each team logo based on how far above or below the ABA League average they are in offensive and defensive points per possession.

- Despite their loss to Koper Primorska in Round 3, Budućnost VOLI remains the league’s top team in efficiency differential. They have been extremely effective on the offensive end, spacing the floor and creating shots out of the pick and roll at an elite level. Their defense has been strong on the perimeter, but less impressive inside - a point of interest moving forward. If they can begin to protect the rim more effectively, they could emerge as the gold standard of the ABA League this season.

- Cedevita Olimpija sits atop the standings and just a fraction of a point behind Budućnost in efficiency differential. They have played a disciplined style of defense that has served them extremely well and have nice balance on the offensive end.

- FMP has been one of the most pleasant early surprises in recent ABA League history. Competing at a high level on both ends of the floor, they have benefitted from the especially strong play of Duop Reath, Marko Jeremić, and Aleksa Radanov. Each has scored with tremendous efficiency to propel FMP’s offense toward the top of the rankings.

- Reigning champions Crvena zvezda mts has already lost more games than they did a season ago when they nearly ran the table in the ABA League regular season. A great deal of their early struggles can be attributed to a single issue: they have struggled to space the floor. Currently ranked last in spot up efficiency, it seems probable that Zvezda will begin to find their range - only two teams in the last five years have scored under 0.80 points per spot up possession as they are right now. Just how far they can turn things around will go a long way towards determining whether they can defend their title.

- Mornar and Partizan NIS sit on different ends of the spectrum with Mornar looking very capable offensively early on and Partizan faring just as well defensively. It will be interesting to see how both clubs factor into the Playoffs race later in the year given their distinct strengths.

The rest of the ABA League picture is crowded. No teams have been especially weak this year on both ends of the floor meaning their figure to be fewer easy wins on the road than usual this season.

Budućnost VOLIFMPCrvena zvezda mtsPartizan NISMornarKoper PrimorskaCedevita Olimpija
Join thousands of ABA League fans in our digital community by liking us on Facebook, following us on Twitter or Instagram and subscribing to our YouTube channel.
If you like this and our other articles, make sure to sign up for the ABA League newsletter. You will be notified regarding all important news and updates on the ABA League via e-mail.
Social Media
Tweets by ABA_League