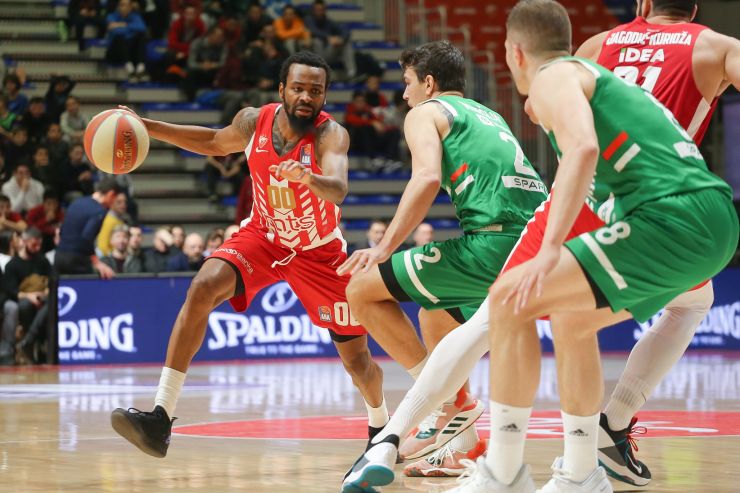 Game recap: Crvena zvezda mts are marching towards reaching their first goal of the season – qualifying for the ABA League Playoffs for the 2019/20 season. The red and white have convincingly triumphed over Cedevita Olimpija and are now a win ahead of the Dragons of Ljubljana in the ABA League standings with two rounds left to be played in the Regular Season.

Key moments: The outcome of the game was basically decided no later than in the first quarter, as Crvena zvezda mts were increasing their lead from minute to minute and left on the first break with the 17-point lead (28:11). There was no chance of return into the game for the green and orange.

Man of the match: Marko Jagodić-Kuridža had a fantastic game against his former coach Jurica Golemac. He had 18 points, 3 assists, 2 rebounds, just as many blocks and a valuation of 19. He is our man of the match.

Can’t trick the stats: Actually, Crvena zvezda mts were better than Cedevita Olimpija in every statistical category and have deservedly written down the win.

Click here for more match stats
Crvena zvezda mtsMatch: Crvena zvezda mts - Cedevita OlimpijaCedevita Olimpija
Join thousands of ABA League fans in our digital community by liking us on Facebook, following us on Twitter or Instagram and subscribing to our YouTube channel.
If you like this and our other articles, make sure to sign up for the ABA League newsletter. You will be notified regarding all important news and updates on the ABA League via e-mail.
Social Media
Tweets by ABA_League