Partizan NIS are coming back to Belgrade with a huge win in their bags as they defeated Mornar-Barsko zlato on the road in Round 12 of the 2021/22 AdmiralBet ABA League regular season. 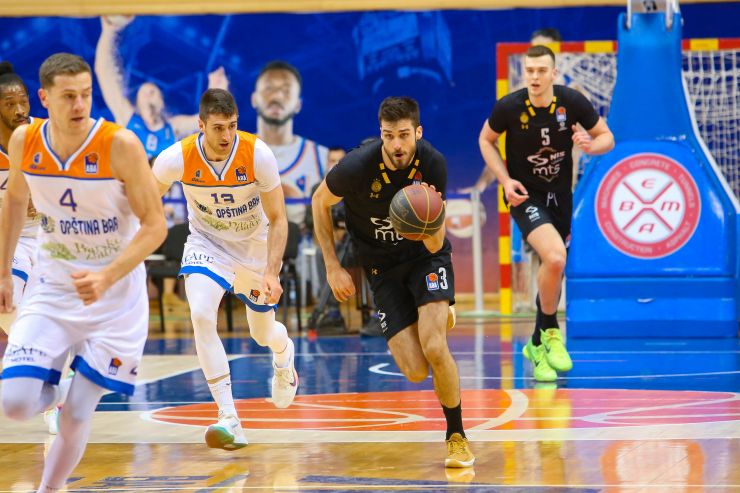 Game recap: Partizan NIS are coming back to Belgrade with a huge win in their bags as they defeated Mornar-Barsko zlato on the road in Round 12 of the 2021/22 AdmiralBet ABA League regular season.

The black-and-whites have been in front throughout the whole game, however they still had to put on their maximum effort to prevent Mornar-Barsko zlato from pulling off a sensational 4th quarter comeback. At the end, Alen Smailagić scored the key 3-pointer, just 1 mintue before the end, to seal the win for the away team.

Partizan NIS have therefore returned on the winning track and they now have the overall score of 10-2. On the other side, Mornar-Barsko zlato’s 3-game winning run has ended with this defeat and their current season record is 4-8.

Key moments: Mornar-Barsko zlato had several chances in the 4th quarter to come really close to Partizan NIS, with the last one coming right before the start of the final minute of the game. At the score of 54:59 for the visitors, Mornar-Barsko zlato best player tonight Nemanja Gordić got fouled and had a chance to reduce the gap even more. Still, he made just one out of the two very important free throws – 55:59.

The following two plays were probably the most important ones in this game. Mornar-Barsko zlato managed to steal the ball from Partizan NIS players, but they failed to convert it into points as Alen Smailagić played a great defense on Nemanja Gordić, forcing him to make a turnover. Immediatelly after that, Alen Smailagić became the hero for Partizan NIS as he pulled up for a 3-pointer and he made the big shot that put the away team in front by 7, just one minute before the end of the game – 55:62. In the rest of the match, Partizan NIS players made their free throws to confirm the win.

Man of the match: That would be Alen Smailagić. Partisan NIS big man scored 18 points and made 7 rebounds, while his 3-pointer at the end sealed the win for the black-and-whites.

Can’t trick the stats: This was simply not the best shooting night for Mornar-Barsko zlato and we all know how much they depend on their 3-pointers. The Bar troops made just 3 three pointers tonight. And they had 21 attempts.

Click here for more match stats
Match: Mornar-Barsko zlato - Partizan Mozzart Bet
Join thousands of ABA League fans in our digital community by liking us on Facebook, following us on Twitter or Instagram and subscribing to our YouTube channel.
If you like this and our other articles, make sure to sign up for the ABA League newsletter. You will be notified regarding all important news and updates on the ABA League via e-mail.
Social Media
Tweets by ABA_League