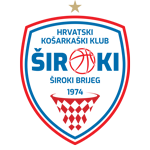 Široki of Široki Brijeg was founded on 5 April 1974 on the initiative of former physical education teacher Stanko Jelačić and group of the students of gymnasium. The club used to be called Mladost and played its first games at the concrete playground between famous Široki Brijeg bell towers and the building of gynmasium of Široki Brijeg. It played its first game seven days later against Troglav in Livno and started competing in lower tiers of the BiH Basketbal League. In 1992 the club was renamed to Široki.

For many seasons, no less than 12, Široki used to compete in the first division of the regional competition. In the 2001/02 and 2011/12 seasons it managed to claim fifth places in the standings, which is still considered to be the greatest achievement of the club. It also competed in Saporta Cup, Radivoj Korać Cup, FIBA Champions Cup, FIBA European League and EuroChallenge Cup. Široki also became champion of the BiH National Championship 10 times, while it claimed the BiH National Cup trophy 9 times.

The National Championship of Bosnia and Herzegovina

The National Cup of Bosnia and Herzegovina

Borac stronger than Široki in Čačak

Categories:
Borac have prevailed over Široki at home in Čačak and have achieved their 18th win of the ABA League 2 season.

Categories:
At home in Sarajevo, Spars have outgunned Široki in a local derby in the ABA League 2 Round 18.

Categories:
In the 16th round of the ABA League 2 season, Lovćen 1947 Bemax have grabbed their seventh win, by outgunning Široki at home in Cetinje.

Categories:
At home in Pendik Sports Hall, Novi Pazar have prevailed over Široki.

Categories:
Široki have prevailed over Dynamic VIP PAY on the road in Belgrade.

Categories:
In a battle of two squads with Playoffs ambitions, Široki have prevailed over Split at home in Pecara Sports Hall, Široki Brijeg.

Big win for Sutjeska at home against Široki

Categories:
In the tenth round of the ABA League 2 season, Sutjeska have beaten Široki in a battle of two teams that are competing for a Playoffs spot.
Show more related news
>
@ABA_League
ABALiga.jtd
ABALigajtd
aba.liga
www.aba-liga.com