Partizan NIS have prevailed over Cedevita Olimpija at home in Štark Arena with a spectacular buzzer-beating game-winning three-pointer by Ognjen Jaramaz, Belgrade and now stand alone at the top of the ABA League standings. 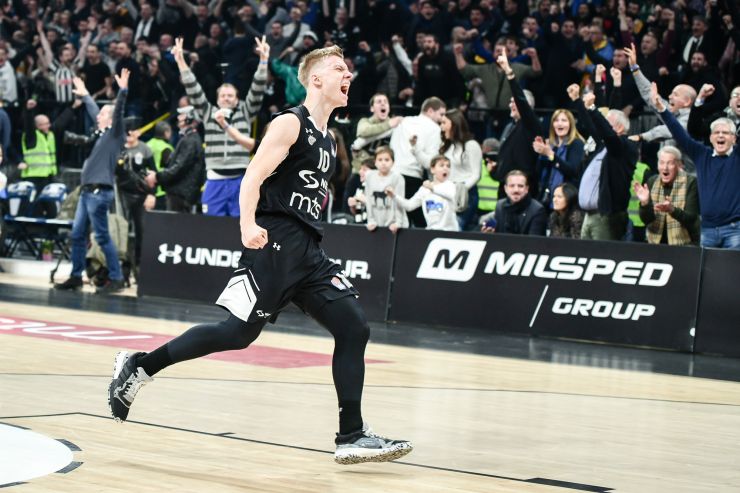 Game recap: Partizan NIS are clelebrating a victory in the battle for the top of the ABA League after 15 rounds of the regular season, as they have prevailed over Cedevita Olimpija at home in Štark Arena in Belgrade. This win keeps Partizan NIS at the very top of the ABA League standings, where they now stand alone, with 12 triumphs after 15 rounds, one more than Budućnost VOLI and two more than Cedevita Olimpija.

Key moments: The game was literally won in the last second for Partizan NIS, as Ryan Boatright put his team up by 2 points with 14 seconds on the game clock. Partizan NIS had the final possession and they did not manage to score until 0.4 seconds left in the game. They made an inboud pass, the ball came to Ognjen Jaramaz, which was in an extremely difficult situation way beyond the arc… He fired and… scored an incredible shot!

Man of the match: Who else, but Ognjen Jaramaz. He did not only personally literally won the game for Partizan NIS with the amazing three-point shot, but has also led the team in scoring with 16 points (2/3 for 3 points), while adding 6 assists, 4 rebounds and a valuation of 23 to his stats.

Click here for more match stats
Match: Partizan NIS - Cedevita OlimpijaPartizan NISCedevita Olimpija
Join thousands of ABA League fans in our digital community by liking us on Facebook, following us on Twitter or Instagram and subscribing to our YouTube channel.
If you like this and our other articles, make sure to sign up for the ABA League newsletter. You will be notified regarding all important news and updates on the ABA League via e-mail.
Social Media
Tweets by ABA_League