Crvena zvezda mts have kept the perfect score in the 2020/21 ABA League regular season as they defeated Mega Soccerbet in a thrilling game in Belgrade. 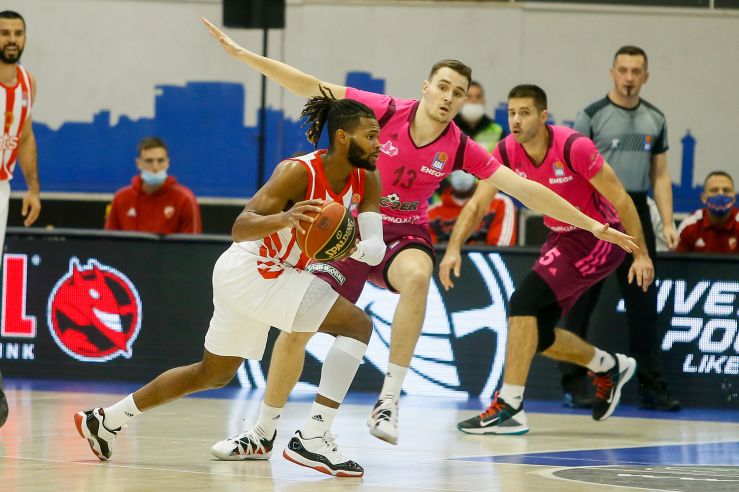 Game recap: Crvena zvezda mts have kept the perfect score in the 2020/21 ABA League regular season as they defeated Mega Soccerbet in a thrilling game in Belgrade.

This week’s ABA League match of the round was super exciting. In the clash between two undefeated teams, Crvena zvezda mts had more concentration in the final minutes and managed to pick up very important road win. Still, no one in this season has made so many problems to the red & whites as Mega’s youngsters did this Sunday afternoon. The home side played an excellent game, but they just lacked a bit of experience in crucial moments to stun the mighty opponent.

Crvena zvezda mts now have the overall score of 4-0, while Mega Soccerbet are at 3-1.

Key moments: Crvena zvezda mts were up by 14 points twice in this match. Firstly in the opening quarter – 20:6, while then they once again gained a 14-point lead in the 2nd quarter – 32:18. Sill, both times Mega Soccerbet managed to perform a comeback and to stay in this game. Eventually, Mega Soccerbet even managed to take the lead in the final quarter. They were up by 3 points with two-and-a-half minutes left on the game clock – 68:65, but then Crvena zvezda mts answered back with the crucial 9:2 run to take over the lead – 74:70.

Mega Soccer bet had a chance to take this game into overtime, however Filip Petrušev missed a very difficult 3-point shot at the buzzer.

Man of the match: Jordan Loyd was once again the best player in Crvena zvezda mts team, even though he suffered an ankle injury early in the 2nd half. Loyd made 19 points, including some very important shots late in the 4th quarter.

Can't trick the stats: Mega Soccerbet have won the battle in the paint against Crvena zvezda mts as they made more rebounds than the red & whites in this match. However, Dejan Davidovac grabbed the key offensive rebound on 15 seconds before the end after which he scored the 2-pointer to increase the lead of Crvena zvezda mts to 74:70.

Click here for more match stats
Match: Mega MIS - Crvena zvezda mts
Join thousands of ABA League fans in our digital community by liking us on Facebook, following us on Twitter or Instagram and subscribing to our YouTube channel.
If you like this and our other articles, make sure to sign up for the ABA League newsletter. You will be notified regarding all important news and updates on the ABA League via e-mail.
Social Media
Tweets by ABA_League