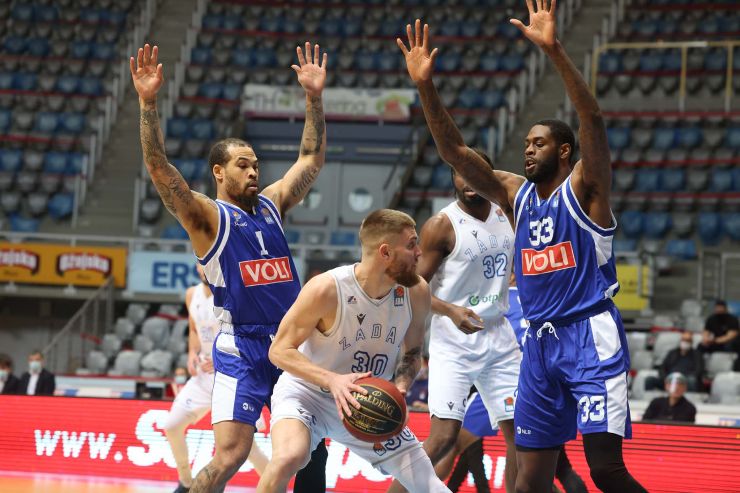 Game recap: On the road in Krešimir Ćosić Arena in Zadar, Budućnost VOLI have prevailed over the hosts and grabbed their 16th win of the ABA League season. This is the second win of Budućnost VOLI over Zadar in just 10 days. With this win, the squad led from the bench by Dejan Milojević, is staying firmly seated in the Playoffs race, as they are now on a 16:3 record, with only Crvena zvezda mts having lost less games. On the other side, Zadar continue their ABA League season with a 6:13 record and still have a lot of struggle ahead of them in order to escape the danger zone near the bottom of the ABA League standings.

Key moments: Zadar were the ones to open the game with a flying start and they were up by 9 points already in the 7th minute of the game (13:4). However, that’s when Budućnost VOLI woke up and within the next 9 minutes, they made a 27:4 run, turning the game completely upside-down and leading 17:31 with 4 minutes left in the second quarter. As it turned out later in the game, this was enough for them to prevent Zadar from threatening to take their lead away.

Man of the match: Once again, Nikola Ivanović of Budućnost VOLI emerged as the key player for the Podgorica squad, as he led them to the win with 17 points, 8 assists, 3 steals, 2 rebounds and a valuation of 27. He is our man of the match!

Can’t trick the stats: Zadar have won the rebounding battle (33:26), but their assists turnover ratio (14:24) was terrible in comparison with the one of Budućnost VOLI (20:17). Also, they scored only 1 three pointer out of 15 attempts (7%), which was simply not enough, given that Budućnost VOLI have been hitting triples with 40% accuracy (14/35). These were the crucial facts of the game in terms of stats.