Budućnost VOLI have scored their 8th consecutive win in the 2020/21 ABA League regular season as they beat Mega Soccerbet in Podgorica in Round 24. 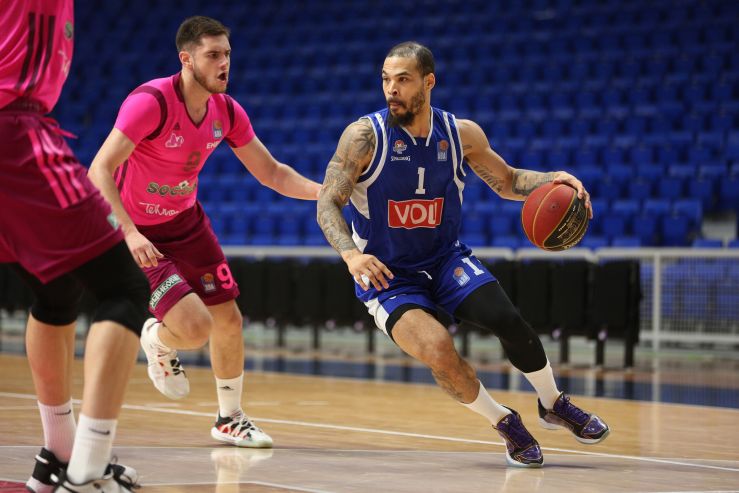 Game recap: Budućnost VOLI have scored their 8th consecutive win in the 2020/21 ABA League regular season as they beat Mega Soccerbet in Podgorica in Round 24. Although the final score suggests that this was a comfortable win for the blue-and-whites, this was actually quite an exciting game in which the winner was decided in the final quarter. Budućnost VOLI made a 16:3 run in the first 6 minutes of the 4th quarter to escape on a 20-point lead and at that point it was clear that the home team would take the win in this match.

Key moments: The key moment of this game happened in the dying seconds of the 3rd quarter. Mega Soccerbet had a chance to reduce the gap to just 3 points, but after failing to convert an alley-oop play into points, they made a reckless foul in the last second of the 3rd quarter to give 2 free throws to Budućnost VOLI team. Therefore, instead of reducing the gap to 3 points, Mega Soccerbet let Budućnost VOLI increase their lead to 7 points – 74:67 and after that the home team used the good momentum to make a flying start in the 4th quarter.

Man of the match: Budućnost VOLI point guard Nikola Ivanović made a brilliant performance in the match against his former team Mega Soccerbet. Ivanović finished the match with 20 points, 6 assists and 3 rebounds, while his overall index rating was 31.

Can’t trick the stats: Mega Soccerbet made too many turnovers today in Podgorica. The visitors had 18 turnovers, while on the other side, the home team made just 10.

Click here for more match stats
Match: Budućnost VOLI - Mega MIS
Join thousands of ABA League fans in our digital community by liking us on Facebook, following us on Twitter or Instagram and subscribing to our YouTube channel.
If you like this and our other articles, make sure to sign up for the ABA League newsletter. You will be notified regarding all important news and updates on the ABA League via e-mail.
Social Media
Tweets by ABA_League