Cedevita Olimpija have rolled over Krka in the local derby in Stožice Arena in the AdmiralBet ABA League Round 1. 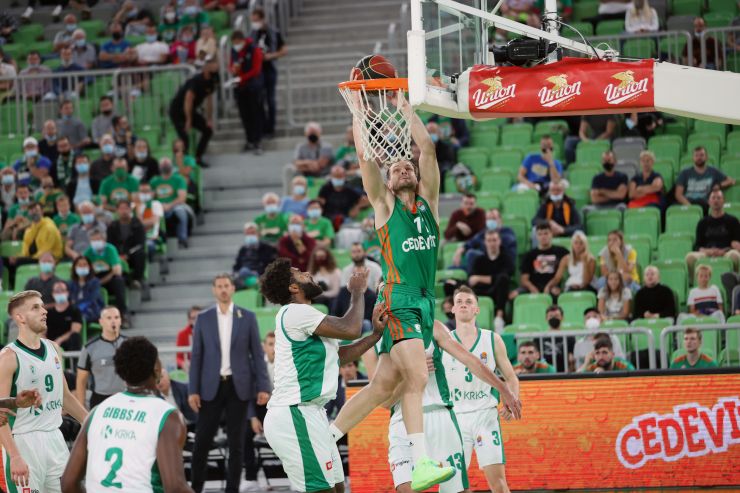 Game recap: Cedevita Olimpija have rolled over Krka in the local derby in Stožice Arena in the AdmiralBet ABA League Round 1. It has been a fairly one-sided contest, where the hosts have been up almost from the entire beginning and until the end, when they have celebrated a convincing win. Before the game, Cedevita Olimpija honoured their former player Miha Zupan, that has recently finished his playing career.

Key moments: Krka were the ones to start the game better, as they have been up 10:3 after 3 minutes of the game. However, Cedevita Olimpija fought back and by the end of the first quarter, they were already up with the score of 18:15. They have opened the second quarter with a 9:0 run afterwards and created themselves a comfortable 12-point lead (27:15) by 13th minute and as it turned out later in the game, Krka did not manage to fight their way back into the battle for a win

Man of the match: Newcomer in the Dragons lair Zach Auguste had a perfect debut in front of the fans in Stožice Arena, as he led his team to the win with 15 points, 5 rebounds, 3 steals and a block, which was enough for the valuation of 25 and the title of the Man of the Match.

Can’t trick the stats: Cedevita Olimpija have outrebounded Krka 35:28 and that was crucial for the smooth flow of their game as they dominated the court in Stožice Arena.

Click here for more match stats
Match: Cedevita Olimpija - Krka
Join thousands of ABA League fans in our digital community by liking us on Facebook, following us on Twitter or Instagram and subscribing to our YouTube channel.
If you like this and our other articles, make sure to sign up for the ABA League newsletter. You will be notified regarding all important news and updates on the ABA League via e-mail.
Social Media
Tweets by ABA_League