Zadar have won a big battle vs. Split in the last round of the 1st part of the 2021/22 regular season. 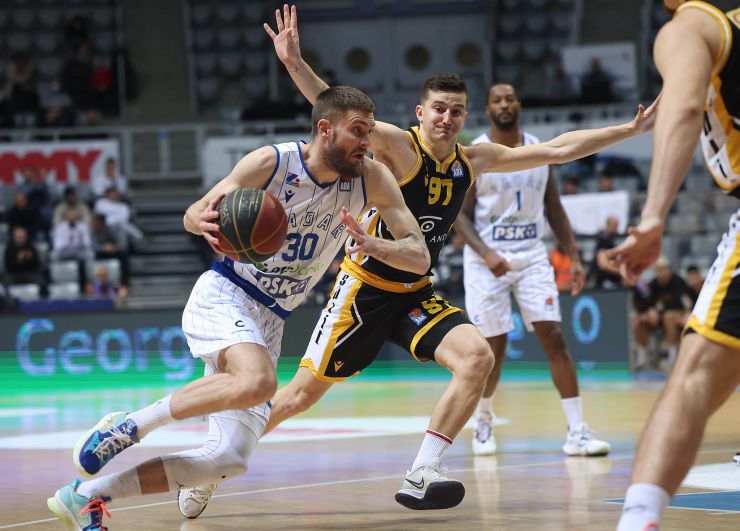 Game recap: Zadar have won the thrilling game vs. their old rivals Split in Round 13 of the 2021/22 AdmiralBet ABA League regular season. The hero of the night was Zadar’s forward Aleksandar Bursać who blocked Split’s player Shannon Shorter in the final moments of the 4th quarter to win the game for the home team.

Zadar have therefore escaped the relegation zone as they now have the overall score of 4-9, while Split remained the last-placed team on the standings with the season record of 2-11.

Key moments: Split have been in front for most of the game, however they lost their lead in the key moments of the 4th quarter. With 6 minutes remaining on the game clock, the visitors were up by 54:52, while then Zadar made the 8:0 run to take over the lead for the 1st time since the opening quarter – 60:54.

But, that was only the start of a late drama. Despite losing by 6 points while entering the final minute of the game, Split refused to surrender and they managed to make a quick 5:1 run to reduce the gap to just 2 points – 61:59. And, Split had a chance to perform a miraculous last-minute comeback as they had the ball-possession, with less than 24 seconds remaining on the game clock.

Split's plan was to give the ball to their latest signing Shannon Shorter, who scored some big points for them tonight, including the 3-pointer that he made just couple of moments earlier to reduce the gap to 2 points – 61:59. However, Split did not count that Zadar's forward Aleksandar Bursać would play a perfect 1-on-1 defense on Shorter. In the last seconds of the game, Bursać blocked Shorter to win the game for Zadar. Check it out.

Man of the match: Justin Carter has posted another double-double as he finished the match with 18 points and 10 rebounds. He also scored some big points for his team in the 4th quarter in which Zadar managed to take over the lead, while Carter's overall index rating tonight was 27.

Can’t trick the stats: What is interesting about the stats is that Zadar made 3 blocks in this match, while Split team had 0. At the end, one of those three blocks decided the winner.

Click here for more match stats
Match: Zadar - Split
Join thousands of ABA League fans in our digital community by liking us on Facebook, following us on Twitter or Instagram and subscribing to our YouTube channel.
If you like this and our other articles, make sure to sign up for the ABA League newsletter. You will be notified regarding all important news and updates on the ABA League via e-mail.
Social Media
Tweets by ABA_League