Crvena zvezda mts have extended their winning streak in AdmiralBet ABA League as they defeated Zadar in Belgrade in Round 20. 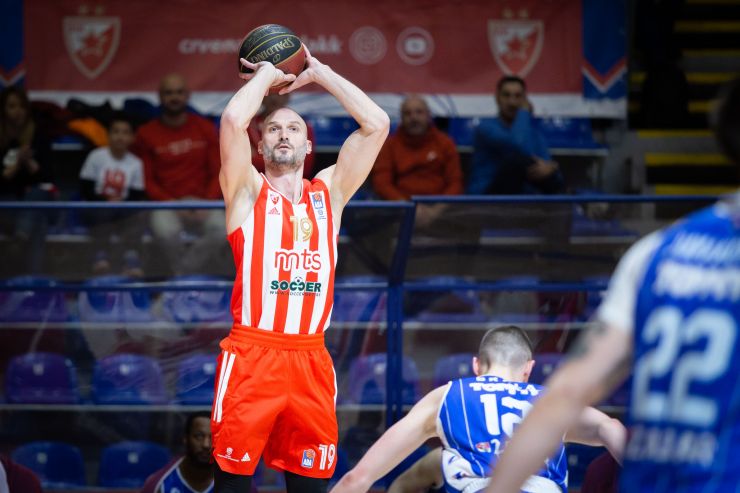 Game recap: Crvena zvezda mts have extended their winning streak in Admiralbet ABA League as they defeated Zadar in Belgrade in Round 20.

This was the 15th consecutive win for the reigning champions in this season and they have now improved their overall score to 17-1. Crvena zvezda mts have also extended their home-court winning run against Zadar as this was their 9th straight win in Belgrade against their old rivals.

After losing today’s game, Zadar dropped to 6-12, but they are still in the safe zone with 3 wins more than the two bottom placed teams Split and Krka.

Key moments: Crvena zvezda mts increased the pace somewhere around the middle of the 2nd quarter to escape on a double-digit lead before halftime – 51:37, while they continued to push forward with the start of the 2nd half to increase the margin to 26 points in the middle of the 3rd quarter – 70:44. Zadar managed to make a 12:0 run after that and to reduce the gap to 14 points once again – 70:56, but the margin was just still too big for the visitors to pull off a miraculous 4th quarter comeback.

Man of the match: Ognjen Dobrić played a PERFECT game! Crvena zvezda mts guard was the game top scorer with 23 points, while he did not miss a single shot along the way – 2/2 FG2, 5/5 FG3, 4/4 FT. Impressive.

Can’t trick the stats: Zadar made 24 turnovers this evening which is just too much, but it can be explained with the fact that they came to Belgrade with just 9 players and they simply did not have enough strength to keep up with Crvena zvezda mts throughout the whole match.

Click here for more match stats
Match: Crvena zvezda mts - Zadar
Join thousands of ABA League fans in our digital community by liking us on Facebook, following us on Twitter or Instagram and subscribing to our YouTube channel.
If you like this and our other articles, make sure to sign up for the ABA League newsletter. You will be notified regarding all important news and updates on the ABA League via e-mail.
Social Media
Tweets by ABA_League