Crvena zvezda mts have defeated Igokea in Belgrade in Game 1 of the 2021 ABA Playoffs Semi-Finals. 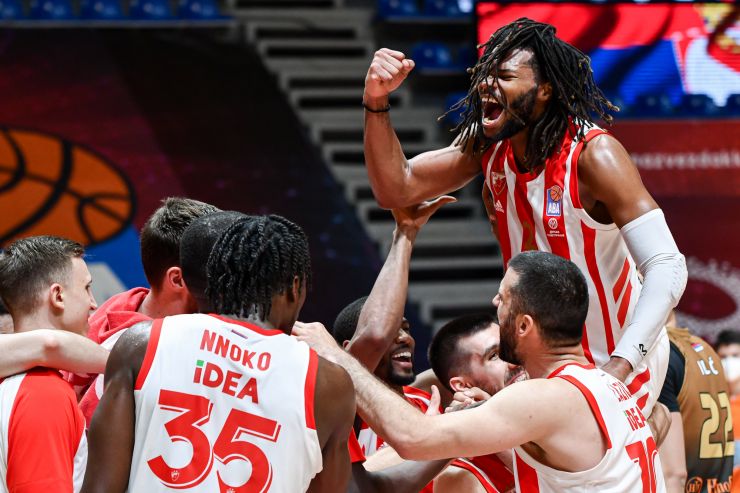 The red-and-whites have protected home court at the start of this semi-final series and have therefore come just a win away from advancing to the 2021 ABA League Finals. Still, despite winning the game by 15 points, the Belgrade team cannot say that this was a walk in the park for them. For 30 minutes Igokea was more than just a worthy opponent. The visitors have had the lead most of the time during those first 3 quarters, however then the Laktaši troops ran into the red-and-white defensive wall in the final quarter.

Crvena zvezda mts defense looked simply perfect in the final 10 minutes and that defensive performance has brought them the precious win at the end.

Key moments: As we have previously mentioned, the winner of this game was decided in the 4th quarter. Crvena zvezda mts were up by just 1 point at the end of the 3rd quarter – 56:55, while then they won the 4th quarter by 20:6! Yes, the red-and-whites conceded just 6 points in the final 10 minutes of this game.

Can’t trick the stats: Crvena zvezda mts have won the battle in the paint. The home team made 38 rebounds tonight, while the visitors had 24.

Click here for more match stats
Match: Crvena zvezda mts - Igokea
Join thousands of ABA League fans in our digital community by liking us on Facebook, following us on Twitter or Instagram and subscribing to our YouTube channel.
If you like this and our other articles, make sure to sign up for the ABA League newsletter. You will be notified regarding all important news and updates on the ABA League via e-mail.
Social Media
Tweets by ABA_League