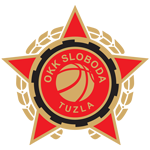 of basketball in Tuzla date back to the post-World War II. Period. The basketball lovers have founded basketball club Sloboda in 1946. In former Yugoslavia, the club competed in the first federal league of Yugoslavia – YUBA. Afterwards, the club went on to compete in the BiH National Championship. In 2011 the club ceased to compete and faced reorganization, so after 2011, OKK Sloboda became the pillar of basketball in the town and took over all of the elements of KK Sloboda and became a member of Sloboda Sports Society. OKK Sloboda started competing in the lowest tier of the A2 League North of BiH national championship and quickly got to the top division and to the peak of BiH club basketball.

Basketball in Tuzla reached its glory days in the 1990s and early 2000s, when Sloboda Dita won three BiH National Championships, four BiH National Cups and two BiH Super Cups, and took part in the Radivoje Korač Cup and in the FIBA Saporta Cup. KK Sloboda Dita played in the first season of regional ABA league (Adriatic Goodyear League) in the years 2001/02 and finished in fifth place. OKK Sloboda reached its best results in the 2014/15 and 2018/19 seasons, when it reached the fourth place in the BiH National Championship. In 2019/20 season, OKK Sloboda became a member of the ABA League 2.

Spars Realway stronger than Sloboda in the local derby

Categories:
In a local derby in Sarajevo, Spars Realway have used their home court advantage to triumph over Sloboda.

Categories:
In the 21st round of the ABA League 2 season, Sloboda have prevailed over Rogaška at home in Mejdan Sports Hall, Tuzla.

Sloboda celebrate on the road in Novi Pazar

Categories:
On the road in Novi Pazar, Sloboda have achieved an important win in the battle to avoid the danger zone at the bottom of the ABA League 2 standings, over Novi Pazar.

Categories:
Sloboda have beaten Sutjeska at home in Tuzla and grabbed their fourth win of the ABA League 2 season.

Ninth win in a row for Borac