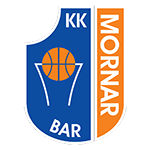 Basketball club Mornar Bar has been established in 1974 with the name Gimnazijalac Bar. Their players were the pupils of the Bar Gymnasium. Soon the club changed its name into Mornar and since then they have proudly worn this name.

Glory days The club achieved a huge breakout midway through the 1990s, when it succeeded in qualifying to the at the time prestigious FIBA Radivoj Korać Cup through the Yugoslavian League which used to be one of the strongest domestic leagues in Europe at that time. However, the breakthrough season in club's history is the 2016/17 season, when the club managed to reach the finals of Montenegrin National Championship and National  Cup, as well as the final of the Balkan League. Also, that season, for the first time in their history, they managed to achieve the promotion to the ABA League. In 2018, they have reached the ABA League Playoffs and won the Montenegrin National Championship and this season is until today known as their most successful in club's history.

Categories:
In the opening game of the ABA League Round 18, Zadar will be hosting Mornar at home in Krešimir Ćosić Arena in Zadar.

Categories:
In the opening game of the ABA League Round 16, Mornar have celebrated a win after overtime over Cedevita Olimpija in Ljubljana.

Categories:
In the opener of the 16th round of the ABA League season, Cedevita Olimpija will be hosting Mornar at home in Stožice Arena in Ljubljana.

MATCH OF THE ROUND: Can Partizan continue their winning streak?

Categories:
On Saturday night, Partizan NIS will be hosting Mornar at home in Belgrade in a derby game of the ABA League Round 14.